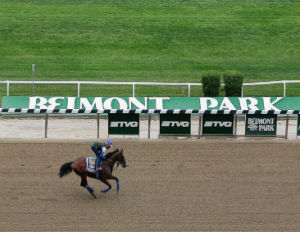 This weekend, thoroughbred American Pharaoh secured a place in history after winning the 147th Belmont Stakes, and becoming just the 12th horse to win the Triple Crown, after previously winning The Kentucky Derby and The Preakness Stakes. He is bred and owned by Ahmed Zayat of Zayat Stables, LLC, and trained by Bob Baffert.. Following the race, Baffert spoke with reporters saying “”It’s very emotional, I’m thinking about my parents, I wish they were alive to see this. I was hoping it would happen. I didn’t know how good it was going to feel. Now I know.â€ Longtime rider Victor Espinoza, who won his first Triple Crown after three tries, said “It’s just an amazing thing, it’s just unbelievable how things work out. It’s just an amazing horse like American Pharoah. I was coming to this race with so much confidence the last two times. It’s just unbelievable.â€ Pharaoh is the first Triple Crown winner since 1978, and Victor Espinoza is the only Hispanic jockey to win the Triple Crown.

As the international legal troubles for FIFA continue to build, the 2015 FIFA Women’s World Cup is offering Â a reprieve for the fans of the sport. When asked by reporters about the problems plaguing the organization, and whether or not any of those issues will spill over into the women’s tournament, Â Victor Montagliani, the president of the Canadian Soccer Association responded, “This World Cup? No, absolutely not… ” Certainly a relief to the fans and players that are anxiously awaiting the tournament – which kicked off Saturday in Canada. Montagliani added, “I actually think that it’s a positive thing that the first tournament after whatever happened last week is the Women’s World Cup, because women’s football is a very pure form of football. And I think women’s football can shine some light in the dark clouds that are hanging over the game.”