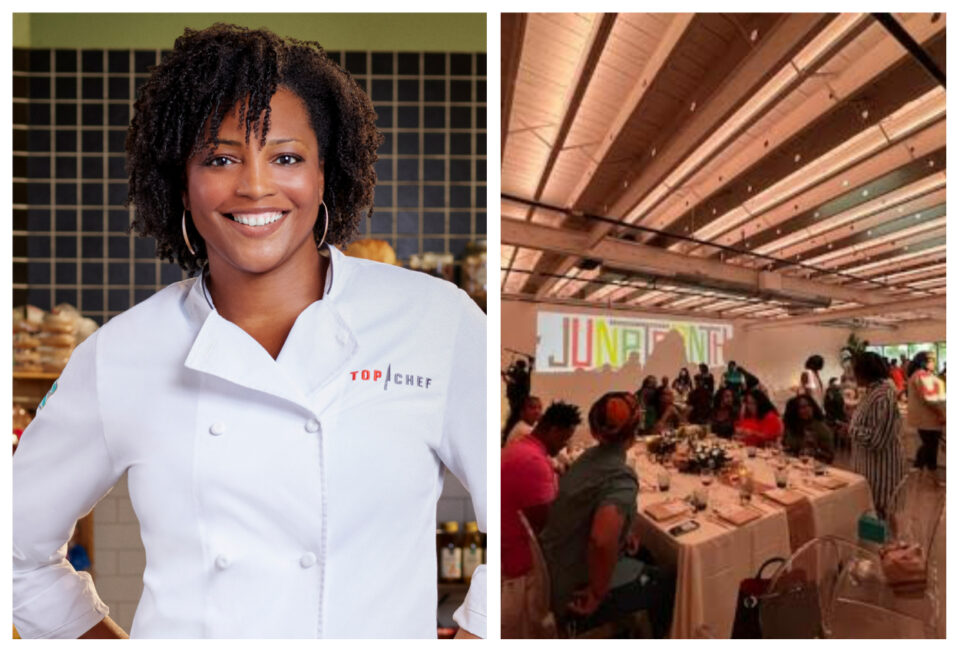 BLACK ENTERPRISE was invited to the jubilee which featured a lineup of Black chefs, winemakers, distillers, growers, and purveyors who joined Chef Burrell to raise funds for the Houston-based nonprofit, Lucille’s 1913.

Burrell captured the flavor of freedom in foods from across the African diaspora. The chef opened with, “Juneteenth is rich. It’s watermelon. It’s collard greens. It’s everything African American.”

In the spirit of togetherness, Burrell invited guests to expand their palates with the help of Chef Mark Clayton and Chef Mariya Russell. Clayton is the executive chef and a partner at Squable restaurant in Houston. Russell joined Burrell and Clayton in the kitchen as the first African American woman chef to have led a Michelin-starred restaurant. Cocktail hour featured a watermelon elderflower punch and Burrell’s green tomato canape, beef tongue and buttermilk. Russell created etouffee crawfish toast, while Clayton made hog’s head cheese.

According to the nonprofit’s website, “Lucille’s 1913 provides 686 meals a day to underserved communities in Sunnyside, Acres Homes, Fifth Ward, and Third Ward in Houston.” The organization works to combat food insecurity and waste, create training and employment opportunities, and empower communities to discover a self-sustainable livelihood through food.

Burrell, who is African American, hopes to host a dinner annually with different chefs across the globe. Burrell and her team rooted the dinner in community. Her goal is to get enough sponsors to gift seats at future dinners to members of the Houston community. Burrell wants to provide an opportunity for the community to taste different foods without the financial burden.

The former track and field Olympian turned chef will open her own restaurant, called Late August, this year. Late August will open under Lucille’s Hospitality Group in the heart of Midtown Houston, the Ion District. Chef Burrell shared a few items that will be on the menu at Late August: