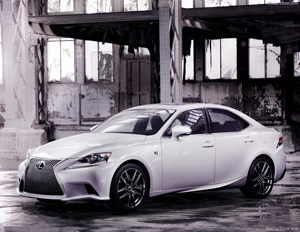 Less than a week after the 2013 Detroit Auto Show wrapped and just a few weeks from this year’s Consumer Electronics Show in Las Vegas, it’s fair to say we still have sleek, tech-savvy cars still on our minds (and hopefully coming soon to our driveways). And one thing’s certain, automotive executives are all for merging technology and luxury. We, at DFRAGG, name the best of the best in entry-level luxury cars, as well as pin point the latest innovations in auto technology:

Lexus introduces new looks for 2014: Lexus IS 250, 350 and 300h hybrid. The IS is one of the most beloved Japanese tuner cars of all times. It has a powerful engine and room for five (3 small people in back seat).Â For 2014, Lexus has implemented the LED light strip into the top part of the bumper, right underneath the headlight. The interior and cockpit’s layout is inspired by Lexus’ super car, theÂ LFA.

When it comes to V6 gas engine options, the IS 250 offers a 2.5 liter, the IS 350 features a 3.5 liter, and Â the IS 300h hybrid , which will be available in Europe, Japan and select international markets and will have the Lexus Hybrid Drive Powertrain, based on a newly developed 2.5L Atkinson-cycle engine.Â Overall, the Lexus IS sedan is hard to belittle when it comes to design, power and available features.

Mercedes-Benz welcomes a new kid to the block.Â Think of what would happen if you merge theÂ C-Class and theÂ CLS: You’ll get the 2014 Mercedes-Benz CLA class 4-door coupe.

At a starting base price of about 29,000 Euros ($35-40,000 dollars), the CLA will have a turbocharged 208 horsepower 4-cylinder engine. The Mercedes-Benz 4-wheel drive iteration–4-Matic–will also be a standard feature, in addition to the sports-tuned suspension. In other words, this bad boy hugs tight corners like a bear and the snow won’t put a stop to your wintery weekend outings.Â You can expect the new CLA 250 to hit US showrooms in the fall of this year.

Infiniti cars as we know ’em will be changing. Not only will each model take on newer physical features, they will also be going under a new moniker in light of Infiniti’s new naming strategy. All sedans and coupes will wear a “Q” badge, whereas crossovers and sport utility vehicles will have the “QX” badge. The double digits after the letters of the model distinguish the level ofÂ hierarchy within the model range.

If those gas gulping days have your pockets empty, Infiniti offers the Q50 sedan in a hybrid model, which will help get you further with better fuel economy. It’s known as theÂ Direct Response Hybrid System with Intelligent Dual Clutch Control. It combines a 3.5-liter 24-valve DOHC aluminum-alloy V6 and compact laminated lithium-ion battery design with a one-motor/two-clutch motor control. The hybrid system’s V6 pushes out approximately 296 horsepower and close to 255 lb-ft of torque, while its 50 kw electric motor packs 67 horsepower and approximately 199 lb-ft of torque. The hybrid system’s net power is 354 horsepower.Â TheÂ combustionÂ 3.7-liter aluminum-alloy DOHC 24-valve V6 pushes out around 328 horsepower and 269 lb-ft of torque. That’s a lot of power for an entry-level luxury sedan.