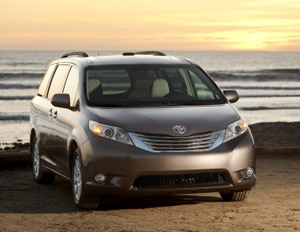 While both GM and Ford have abandoned the minivan market, Toyota, along with a number of brands, has stayed in the game, redesigning their third-generation minivan, the Sienna, for the 2011 model year. In addition to the exterior and interior being reworked, for the first time the van now offers a fuel-efficient 4-cylinder engine. And to help improve the gas mileage, the Sienna is also outfitted with an all-new electronically controlled smooth-shifting 6-speed transmission.

Available in five trim levels–base, LE, SE, XLE and Limited in either a front-wheel drive or all-wheel drive configuration–the redesigned Sienna is capable of carrying anywhere between seven to eight occupants, depending on the seating arrangements, while still providing each individual with ample space. That’s made possible thanks to two additional inches of interior space in the 2011 model, allowing for more passenger comfort.

And just like at home, the seats in the Sienna can be rearranged. They can be stowed away in the rear storage area or they can be slid forward or backwards, offering more aisle space. Also, those traveling with small children will be smitten with the fact that the second-row seats can be moved closer to the front seat occupants so as to attend to the needs of a young child.

Moreover, the Sienna offers a sleeker, cleaner exterior design with an all-new hidden door slider underneath the back window. And depending upon one’s budget, this minivan can be decked-out with a number of features. In the XLE trim I tested, the vehicle was outfitted with dual power sliding doors, second-row captain chairs, leather heated front seats, satellite radio, 10 cup holders and 18-inch alloy wheels.

In addition to the aforementioned features, the smooth-riding Sienna I reviewed was equipped with Toyota’s $6,200 Premium Package, which consists of dual DVD players with wireless headphones, a nav system, a rearview camera, a push-button engine starter, chrome exterior door handles, rear audible parking sensors, iPod connectivity and an upgraded 10-speaker JBL audio system. Yes, this minivan is like a mobile entertainment vehicle.

Within recent years, most consumers have been trading in their mommy-like minivans for not being as cool-looking or fun-to-drive as crossovers. However, there seems to be a resurgent shift toward the minivan market again. Just in the first three months of this year, sales of the 2011 Sienna are up 75 percent from the same period in 2010. Regardless of what changes automakers make, though, it’s still an uphill battle to make minivans seem cool.

If Toyota’s upscale brand, Lexus, offered a minivan, it would be outfitted with the same amenities available in the high-end XLE and Limited trims found in the Sienna. While the space age-looking minivan doesn’t have the same cool effect found in the auto industry’s hottest new segment, crossovers, it’s still capable of providing above average accommodations for seven or eight, including cargo, which is a major downside for most of today’s cramped crossovers.

And, with the exception of the RAV4 and the Highlander, the redesigned Toyota Sienna is outpacing every Toyota SUV and crossover in new-vehicle sales so far this year. This is a major feat, since both GM and Ford walked away from the minivan market a few years ago to focus on the crossover segment. Indeed Toyota’s new minivan shows that it’s back and means business for those who thought the minivan market was dead. In fact, Nissan, Chrysler and Honda all retooled their minivans for the 2011 model year.