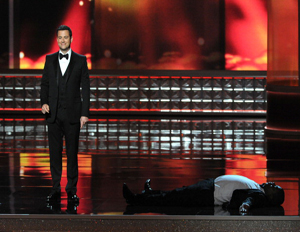 The Saturday Night Live veteran faked passing out on stage, remaining on his back throughout the Best Writing for a Drama category and even after the Homeland winners took the stage. Kimmel instructed viewers to tweet, “OMG, Tracy Morgan just passed out on stage at the Emmys, turn ABC on now!”

It only took a few minutes for “OMG Tracy Morganâ€ to start trending worldwide on Twitter.

Once the stats were in, it was clear that the award show spoof was a success. “OMG 25,000 tweets instantly thanks to OMG Tracy Morgan Emmys,â€ announced Twitter TV. “Thanks Jimmy Kimmel!â€