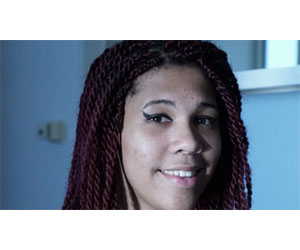 BE: I found your film from Reel Works, and in the film, you were speaking about maybe dropping out of high school. Now, a couple of years later, you’re at the Tribeca Film Festival, you’re at the same events as Robert De Niro–what happened between now and then? How have things changed since you made that film?

Ortiz: A lot of things changed. When I made that first film with Reel Works, I was a little lost. I knew what I wanted to do, but I didn’t know exactly how to pursue it. I had just dropped out of my first high school; I wasn’t really engaged in what I was learning in there. During the time that I dropped out, I joined the Occupy Wall Street movement, so that was a big thing during that time. I was just discovering all of these things, learning about the world, about everything that school didn’t teach you, which was kind of the education I was seeking.

You know how people say, “I took time offâ€? Well, I took time off of high school. I took a semester off of high school, and I took that time to learn everything I didn’t get a chance to learn. I was more involved in politics, I had the chance to regroup and figure out [that] if film and music are all these things that are wonderful and that I do enjoy and that keep me engaged, if these are things that I really want to do, I’m going to have to–for lack of a better term–just go hard.

I also realized the importance of finishing high school and going to college. I was taught in school, it’s basically, you’re at the mercy of the teacher and whatever anyone in the classroom tells you. But during that time off, I got the opportunity to speak to so many different other people, who told me differently, and were like, “School is the opportunity where you get to learn what you want to learn, so make sure you take control of your own life, take control of your own education.â€

BE: What are your future plans?

Ortiz: I have a lot of future plans, actually. The list goes on and on. One thing I did, about four weeks ago, I started my own production company. It’s called Esconomy Productions, and it is a film and music production company. My goal with that is to be able to promote my own work, and also the work of my peers. It would be a space for young storytellers to come together and work on each other’s projects, because you do need that support system. I’m also a musician, and a singer, and I’m a performing artist, so I do go to a lot of venues and perform my own music. So this summer would be the time after the festival to focus on that. And I also plan on turning Breaking J.A.N.A. into a feature-length [film]. I’m debating if I should turn it into a comic book series before I pursue the feature-length film.

BE: Is there anything that you wanted to add?

Ortiz: I have been blessed to have many mentors in my life.Â  [The] support system that I’ve had, I’m always acknowledging that I would not be where I am today if I wasn’t for all those film and poetry [mentors], and even my parents, those mentors and those artists in my life. Even people from the NAACP, like my NAACP mentors. I’m always putting myself in a position where I want to be taught, and I want to be mentored, and I want to be shown the way. And teaching with the Tribeca Film Institute has taught me how to become a mentor, and not just be the mentee, but be the mentor, and that’s one thing that I strive to do for the rest of my life, is become a mentor for other people.