Tribute to a Titan of Public Service - Black Enterprise

Tribute to a Titan of Public Service 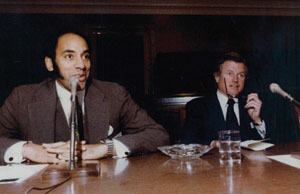 The above scripture was often quoted by Sen. Robert F. Kennedy to his children, to underscore that as a family of privilege, power and fortune, they had a higher obligation to do more to serve humanity than those of lesser means and influence. Indeed, few American families have been entrusted with more or had more demanded of them than the Kennedy family.

In the case of Robert Kennedy and his brother, President John F. Kennedy, the demands of public service cost them their very lives. Likewise, their youngest brother, Sen. Edward M. Kennedy, also gave his all — except while his older brothers, including Joseph, killed in World War II, died for our country, he was ultimately blessed to live for it. Sen. Kennedy picked up the torch of social justice for all Americans from his fallen brothers and ran a magnificent race, one that ended for him on Aug. 25, 2009.

Though I did not share the Kennedys’ upbringing of wealth and privilege, the gospel of “to whom much is given, much is requiredâ€ is a fundamental value shared by the Graves family. My connection to the Kennedys traces back to my years as an aide to Robert Kennedy, an experience that shaped my own ambitions and helped put me on the path to launch Black Enterprise nearly 40 years ago. And though I ultimately chose to make my mark in business, not in politics, the causes and principles that Edward Kennedy devoted his life to civil rights, racial equality, equal access to quality education, and healthcare are the principles I’ve always stood and fought for, as I continue to do today.

During a legislative career spanning five decades, Sen. Kennedy was a powerful, often irresistible, force for change in America. A gifted orator and revered Democratic Party statesman, Kennedy’s legendary effectiveness as a legislator was in large part due to his ability to create alliances with his political opponents. With more than 15,000 Senate votes to his credit, it is impossible to summarize his legislative track record in the space of this column. Kennedy wrote more than 2,500 bills, 500 of which were passed into law. Among his most prominent legislation impacting lives every day are the Americans with Disabilities Act and the Family and Medical Leave Act.