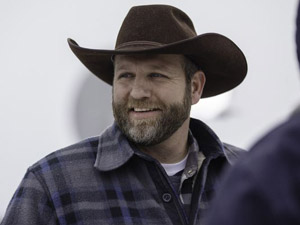 Early Wednesday morning, the leader of the Oregon ‘militia’ earned criticism from the Twitter universe for a tweet he wrote that compared himself to civil rights activist Rosa Parks.

“We are doing the same thing as Rosa Parks did. We are standing up against bad laws which dehumanize us and destroy our freedom,” Ammon Bundy tweeted.

Bundy and his brother Ryan appear to be leaders of about two dozen armed protesters who, on Saturday, broke into a Malheur National Wildlife Refuge in eastern Oregon and refused to leave as a reaction to the prison sentences of two ranchers who are serving time for setting fire to federal grazing land.

According to the New York Times, in 2001 and 2006, Dwight Hammond, 73, and Steven Hammond, 46, set fires to stop invasive plants from spreading on their ranch, which is adjacent to the refuge. In October, a judge ruled that the three month prison sentence for the father and one year sentence that was previously set for the son was too short under federal law and that the two men will now serve about four more years each. In response to these new sentences, the protesting group, which refers to themselves as Citizens for Constitutional Freedom, is demanding that the Hammonds be set free and the federal lands be turned over to local authorities.

Bundy’s Wednesday morning tweet however is not the first time the group has compared themselves to movements of the black community. On Monday, one member of the Oregon group who identified himself as “Fluffy Unicorn” told The Huffington Post, “The Black Lives Matter movement, they can go and protest, close freeways down and all that stuff, and they don’t get any backlash, not on the level that we’re getting.”

With comparisons of the Oregon protesters to movements of the black community, NY Daily News writer Sean King penned a piece in response to Bundy linking himself to Parks that proves the treatment of white American protesters and black American protesters should never be aligned together.

“As a brave black woman in the Jim Crow South, Parks risked her life on Dec. 1, 1955. She did it without an armed posse to back her up. She did it as a petite woman of the oppressed class in the face of white men who were fully empowered to brutalize black bodies with little threat of punishment,” King wrote. “Nothing you have done or are doing right now resembles the earth-shattering bravery of what Parks did 61 years ago. Nothing at all.”

As Bundy continued to tweet about how he and his group of protesters won’t leave until they get their land back, Twitter continued to throw criticism at him that perfectly summed up our thoughts on his comparison to the late and great Rosa Parks.