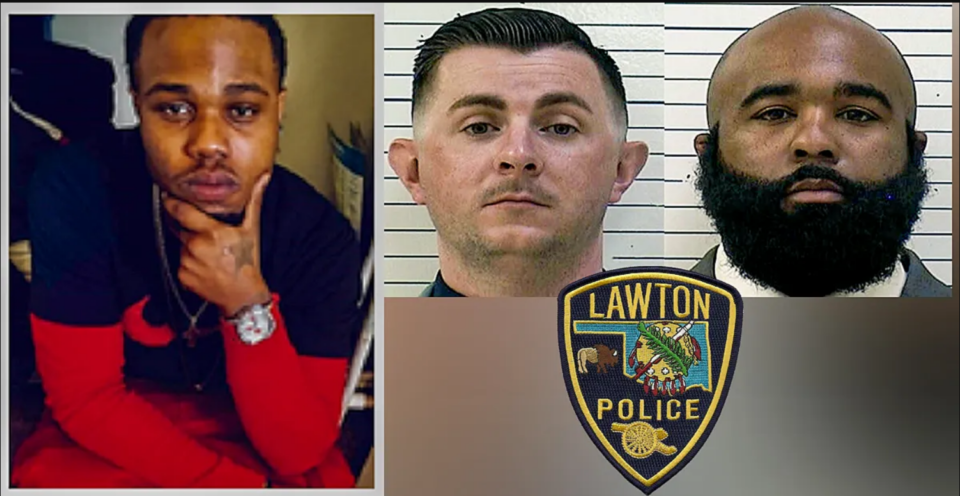 Body camera footage in the shooting of Quadry Sanders by two former Lawton, Oklahoma, police officers was released last week as manslaughter charges against them were filed.

According to The New York Times, officers Nathan Ronan and Robert Hinkle responded to a call on Dec. 5, 2021, of a man under a protective order inside the home of the person listed on the order.

The local report about the shooting said that Sanders was inside the home and refusing to let one of the residents leave. Officers also received information that the man was armed with a firearm. Sanders failed to comply with several orders, often going in and out of the home in defiance of officers. However, Sanders is seen on the video raising his hands above his head when he is shot four times by Hinkle.

He then sits with his hands up and is shot at again by Hinkle another seven times. Ronan also fires four times at Sanders, who was pronounced dead in an ambulance on the way to a local hospital. Officers did not provide medical assistance to the man until two minutes after the shooting ended.

The officers were fired on Jan. 7 after an internal investigation. A released statement said, “The City of Lawton and the Lawton Police Department “firmly believes in policing itself in the same manner the community is policed and holds itself to the highest possible standards. The actions of these officers were not in conformance with the Lawton Police Department’s well-established training protocols, policies, practices, customs or procedures.”

Lee Merritt, an attorney for the family, shared a video clip announcing the charges on Instagram, writing, “I can’t find a single redeemable factor that mitigates any aspect of this shooting. It was just murder. There was no justification. These men must be prosecuted to the fullest extent of the law.”

According to the New York Times, Stan Booker, the mayor of Lawton, said in a statement, “Although this decision and the releasing of information that followed may provide clarity to this tragic incident, it does not come without impacting one’s stages of grief and mourning of a lost loved one. I believe the Lawton Police Department holds itself to the highest possible standards, and I know it will continue to do so moving forward.”