Tyler Perry Trademarks 'What Would Jesus Do' 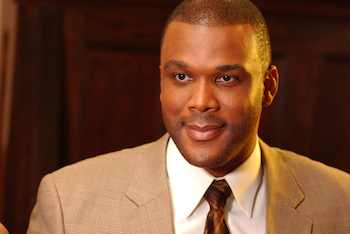 The phrase “What Would Jesus Do” has adorned bracelets, license plates, and t-shirts. Now, all that meta belongs to media mogul Tyler Perry.

The “Madea Goes To Jail” auteur recently won a trademark battle over the usage of the term. The decision has been made public and opinions have varied from queries about how Perry plans on utilizing the phrase to people expressing surprise that it was even available for trademarking.

The case involved the OWN content creator and former “I Want to Work for Diddy” cast member Kimberly Kearney. Nicknamed “Poprah” on the short-lived VH1 show, Kearney had actually registered the trademark first back in January 2008 for the purposes of “entertainment services in the nature of an on-going reality based television program.”

Months later in May 2008, Perry also filed for the trademark, requesting the use of “What Would Jesus Do” for “entertainment services, namely arranging and conducting live concerts and producing television program and motion picture films.” Fast forward three years later, in February 2011, Perry filed a petition to cancel Kearney’s registration. Allegations from his camp were that Kearney was squatting on the trademark–not moving forward with her WWJD-based reality show, and not securing meetings or selling the show to any networks.

Kearney disputed the claims by saying she actually met with Tyler Perry Studios, and pitched the show to him. She also claimed that “not many months after sharing this program and soliciting [Perry] for financial support of this program, [Perry] filed to register this mark; consequently, eventually resulting in this cancellation proceeding.” While Perry’s attorneys attempted to get more word from Kearney, the courts wanted her to answer requests to appear at the Trademark Trial and Appeal Board, which she didn’t do in a timely manner.

With the judgment made last month, Kearney has taken to Twitter to tell her side of the story. “The WHOLE story has not been told! Press don’t know I gave evidence that was NOT EVEN LOOKED AT, he won on a technicality & wouldn’t TESTIFY!”

Perry has not issued a response.