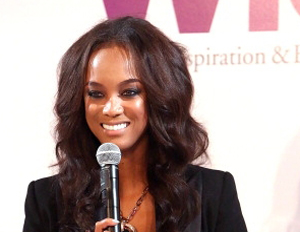 With her popular show “America’s Next Top Model”Â in season 21, Tyra Banks is briefly stepping away from the judging table to put talk show host back on herÂ rÃ©sumÃ©, as the former supermodel has just scored a daily syndicated show deal with Disney-ABC.

The talk show is set to air in 2015 with the 40-year-old business mogul leading a team of lifestyle experts as they discuss topics ranging from fashion and beauty, to home and entertainment, to empowerment and business.

“The fire to inspire women and help them to blaze new paths fiercely burns inside of me,” Banks says in a statement to Deadline. “I’m excited to be partnering with Disney-ABC to usher in a new era of lifestyle, beauty and entertainment that will inspire women to be the CEO of their lives via honesty, humor and the newest tips and tricks without being intimidating or precious.”

Banks, a former student of Harvard Business School, is no stranger to the talk show game as her own self-titled Emmy-Award winning program was on air from 2005 to 2010.

No word yet on the name of the show, but fingers crossed that Banks will have long-lasting success with her new gig.