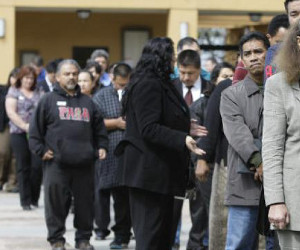 The number of people seeking U.S. unemployment benefits over the past month fell to the lowest level since March 2008, a sign that the job market is healing.

According to numbers released by the Department of Labor, weekly applications dropped 12,000 to about 350,000 in the week ending Dec. 22. But the Christmas holiday may be responsible for skewing the numbers, as many state unemployment offices were closed Monday and Tuesday and could not provide exact data. Economists added the numbers may be affected by Hurricane Sandy.

Left without exact numbers, the government was forced to rely on estimated data for 19 states, instead of the usual one or two states. A spokesperson for the Labor Department said the estimates are usually fairly accurate but added the government will like revise the figures next week.

If the reported numbers are accurate it’s not only a sign of the economy recovering it also suggests companies are not yet slashing jobs because of concerns over the “fiscal cliff.â€