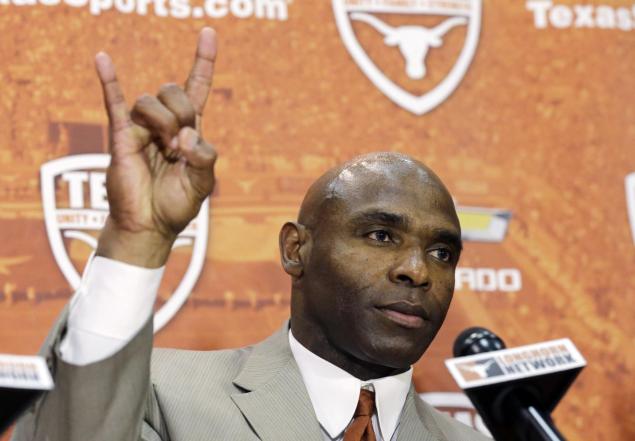 Stronghorns: Texas is seeking to protect its name -- and that of its brand new football coach.

You can’t blame them for trying.

All manner of memorabilia meant to commemorate the arrival of new head football coach Charlie Strong — ‘Texas Strong’ and ‘Stronghorns’ t-shirts, cups and hats — popped up shortly after he was hired. But it looks like it could all be coming to an end.

The entrepreneurs and opportunists are being asked to cease all unlicensed activity by the university’s athletic department, but Texas isn’t stopping there. The university has begun to explore getting the trademark rights to themes and phrases associated with Mr. Strong’s name.

“We like ‘Stronghorns’ because it plays off us having a really strong, forceful team,” said Craig Westemeier, a UT assistant athletic director, according to the Associated Press. “That includes everyone, not just Coach.” The AP reported Texas-branded merchandise from official licensees, including Nike, have to first be approved by the university.

“The university has a lot on the line when it comes to merchandising,â€ the AP reported Wednesday. “The 2013 UT athletics report showed $9 million in net revenue from trademark licensing,” the American-Statesman reported. “Among colleges, it ranked No. 1 in the nation in 2012, the most recent figures available, according to the College Licensing Co. It was the eighth consecutive year that UT topped the list.â€