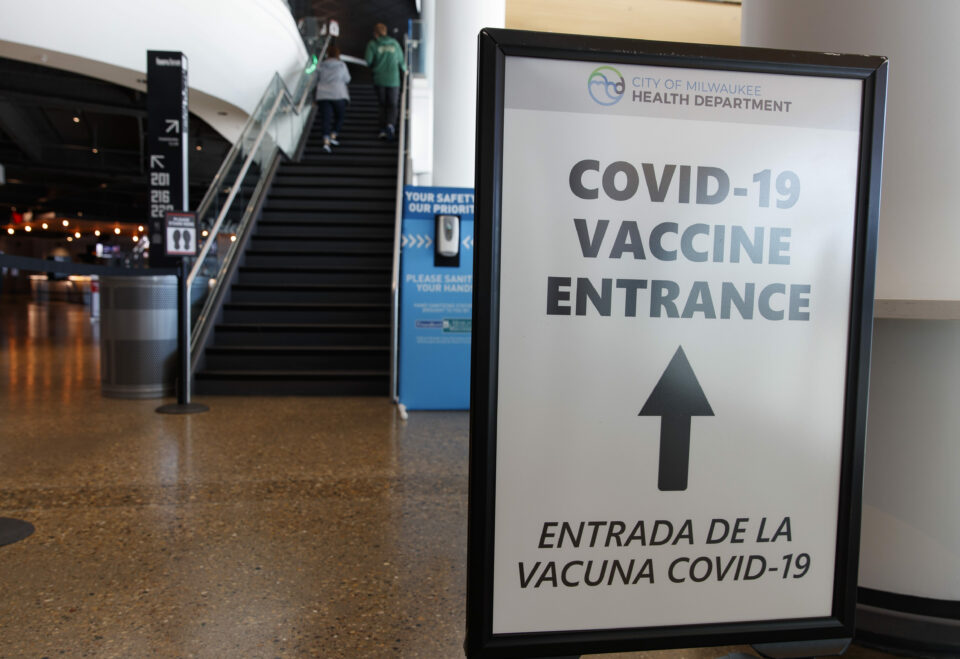 FILE PHOTO: May 2, 2021; Milwaukee, Wisconsin, USA; A sign directing fans where to receive a COVID-19 vaccination prior to the game between the Milwaukee Bucks and the Brooklyn Netsat Fiserv Forum. /Jeff Hanisch-USA TODAY Sports/File Photo

Reuters – NBA players who are not vaccinated against COVID-19 will have to comply with a long list of restrictions to take part in the upcoming season, according to a memo obtained by Reuters.

The NBA’s tentative protocols released to teams on Tuesday showed vaccinated players will only be tested if they show coronavirus symptoms or are a close contact of a positive case.

However, unvaccinated NBA players will have to undergo daily testing prior to entering a team facility, participating in team activities or interacting with players and coaches.

The protocols outlined in the memo are pending agreement between the league and the National Basketball Players Association (NBPA).

The NBPA did not immediately respond to a request for comment.

The 2021-2022 NBA season is set to begin on Oct. 19 amid continuing concerns over the highly contagious delta variant of the novel coronavirus that has hit those who are unvaccinated particularly hard.

A handful of high-profile players, including Brooklyn Nets’ Kyrie Irving and Washington Wizards Bradley Beal, have publicly refused to receive the shots, while some have repeated claims about the vaccine shown to be false by medical professionals.

“It’s untrue,” the nation’s top infectious disease expert Anthony Fauci told the Hugh Hewitt syndicated radio show on Wednesday referring to claims that the COVID-19 vaccine is dangerous or could hurt those who receive it.

“Although I do respect people’s individual rights… when you’re dealing with a deadly pandemic, you’ve got to also understand your responsibility to the society within which you live.”

Among U.S. adults, 11% – or roughly 23 million people – have said they do not want the vaccine, do not plan to get it and that there was nothing that would encourage them to do so, according to a Reuters/Ipsos poll conducted in August.

Four-time NBA champion LeBron James of the Los Angeles Lakers said he decided to get the vaccine after initially being sceptical but stopped short of widely encouraging the jabs.

“I don’t talk about other people and what they should do,” James said. “I don’t think I personally should get involved in what other people do for their bodies and livelihoods … I felt like it was best suited for me and my family and my friends.”

In July, NBA Players Association executive director Michele Roberts told Yahoo Sports that vaccination was not mandatory but 90% of players had already received their shots.

“The situation is obviously we would like to see essentially all of the players for the general safety to get vaccinated,” Fauci told MSNBC in an interview on Wednesday.

Under the NBA draft rules circulated, the league would not allow unvaccinated players to dine in the same room as other players and they must also be given a locker as far away as possible from other players.

Unvaccinated players will also have to remain at the team hotel during road trips, outside game time except for team and essential activities.

With strict vaccination requirements in some local markets, including New York City and San Francisco, players could risk losing pay if they are unable to compete.

“Any player who elects not to comply with local vaccination mandates will not be paid for games that he misses,” said league spokesman Mike Bass.

Damian Lillard, a Portland Trail Blazer who won a gold medal as part of Team USA at the Tokyo Olympics, this week said he got the COVID-19 vaccine just as he had other immunizations growing up, noting some of his relatives had died from COVID.

“I’m just not going to put their health or their lives in danger,” he told reporters. “It’s pretty simple, actually.”