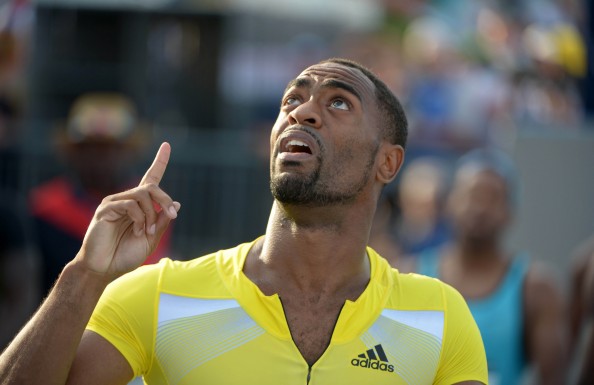 Tyson Gay has tested positive for a banned substance and is pulling out of the World Championships in Moscow next month.

On the heels of failing an out-of-competition drug test this spring, adidas has suspended its endorsement with American track star Tyson Gay.

Gay, 30, and the fastest American to ever live, holds the American 100-meter record of 9.69. He had posted some of his best times in competition this year, namely a strong showing at the U.S. championships in Des Moines in which he ran a 9.75.

“We are shocked by these recent allegations, and even if we presume his innocence until proven otherwise, our contract with Tyson is currently suspended,” an Adidas spokesman said.

“I don’t have a sabotage story. I don’t have any lies. I don’t have anything to say to make this seem like it was a mistake or it was on USADA’s hands, someone playing games,” said Gay, who was said to be crying during an interview with the Associated Press. He didn’t say what substance he tested positive for. “I don’t have any of those stories. I basically put my trust in someone and I was let down.”

Gay said he will have his B sample tested as early as this week. Anytime someone is given a test, two samples are taken. The B sample is taken to make sure there isn’t a variation of the results. Still, a variant result is unlikely (Gay is not denying the allegations) and the punishment could be severe and perhaps even fatal to Gay’s career. Elite track athletes have very short careers; if the allegations are true, he could be looking at a two-year ban.

Gay was supposed to compete in this week’s Diamond League meet in Monaco and the World Championships next month in Monaco. He dropped out of both and is expected to be in Colorado Springs when his B sample is tested.

Sprinters rely on their endorsement deals to bankroll their training, support staff and travel obligations. It was not immediately clear how suspension of his deal with adidas would affect a potential comeback — and, perhaps as equally important, his image: Gay is one of several Americans who took part in voluntary, extra-rigorous drug testing to voice their opinion about doping in competition.

“I compete clean because I really believe in fairness. And besides that, my Mom would kill me!” Gay said.

“Adidas has a clear policy on doping and drug use each of the agreements with our athletes include a clear clause which states that the agreement shall be terminated by adidas if the athlete is found guilty of the possession or use of drugs or any other prohibited substance by the relevant governing sports body having jurisdiction over the athlete,” adidas said in a statement.