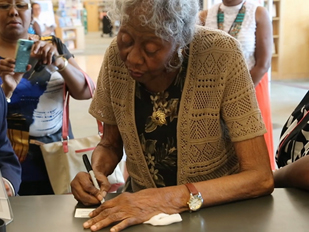 Pearl Thompson, now 92, was a student at anÂ HBCU,Â Shaw University, in 1942 when she attempted to check out a book from the Olivia Raney Library in Raleigh, North Carolina. Thompson was denied a library card because she was black, reports The News & Observer, andÂ was sent to the building’s basement to read.

Seventy-three years later, Thompson was finally issued her library card and accepted it with pride. According to GreensboroÂ News & Record, she entered the Cameron Village Regional Library on Thursday, accompanied with family members, to attend a ceremony in her honor.

“It’s going to take me awhile to get to you,â€ Thompson told the library staff, “but it’s been a long journey anyway.â€

Thompson was brought to tears as she recounted the day she was denied equal access to the public resource. She needed the book to complete a class assignment. Thompson can’t remember which book she was assigned to read for that class, but she didn’t have it so she went to Olivia Raney Library even though she knew it was Whites-only.

After graduating from Shaw,Â Thompson taught in Raleigh’s segregated black schools for 12 years. As a teacher, she says she was determined to give black children every opportunity to read and, though the race-driven event from her past left her upset at the time, she doesn’t seem to hold any animosity.

“I don’t hold any kind of hate in my heart, because that doesn’t do it,â€ she said. “That doesn’t get you there.â€

Coming back to North Carolina to receive her library card happened to be one of the desires listed on Thompson’s bucket list.