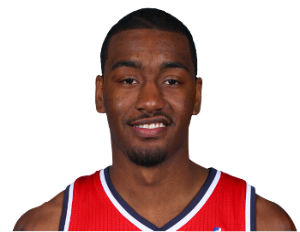 Wall signed a 5-year extension with the Washington Wizards.

John Wall signed a 5-year extension with the Washington Wizards worth nearly $80 million and held a news conference yesterday.

Wall sobbed as he spotted his mother, Frances Pulley, crying in the audience, which included D.C. Mayor Vincent Gray, according the Washington Post.

“It was like a breathtaking moment, seeing my mom and seeing everything she worked for,” Wall told the Washington Post’s Michael Lee. “I mean, I do this because I love the game of basketball and I love playing it, but you also do it for her, as a single parent and what she had to do to raise us and I feel I’m fortunate enough to have the opportunity, especially, to take care of her for the rest of her life and do other things in the community.”

Wall said he’s committed to bringing a championship to the nation’s capital.

“I’ll never let money change me,” Wall said. “I’m already motivated. But this is motivation to another level. The only thing you can do is win now. If you’re not winning what’s the point of getting the contract? You’re still going to get your money but you’re not going to have no fun. It’s no point in having it and not being happy.â€