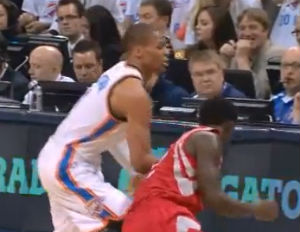 The news that Russell Westbrook will be out for possibly the rest of the 2013 postseason has sent shockwaves through NBA circles.

But, if you watched the game Wednesday evening between the Rockets and Thunder, you saw the play that may have ended OKC’s dreams at a NBA championship.

Halfway through the second quarter, Westbrook was moving towards the baseline with the ball in his hands to call a timeout when Rockets point guard, Patrick Beverley, came out of nowhere and tried to steal the ball. After the attempted steal, you can see the anger on Westbrook’s face towards Beverly. But he was also hobbling to the sidelines.

Westbrook continued to play throughout the game, but you have to wonder if he furthered damaged his meniscus in doing so or was it already torn when Beverley crashed into his knee.

Let’s all hope for a speedy recovery.

Check out the link here if the video fails to play