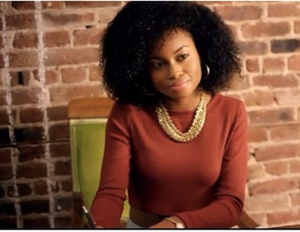 In Wale’s video for his single “The Body”Â featuring R&B crooner Jeremih, the rapper casts an au naturale brown beautyÂ reminiscent of our favorite 90s actresses. The video caught the eye of blogger Necole Bitchie and she reached outÂ to the artist,Â curious as toÂ why he chose to rebel against the music industry’s more common model for this project. His reason was to revisit the days when “‘black women were not hyper-sexualized objects created by doctors with the sole intent to take pictures.’â€ Folarin also expressed his frustrations with the limited representations of black women on TV, reality TV in particular, and his desire to see more of the “ambitious girl” andÂ Â “successful woman” characters on scripted series. In an exclusive blog for Necole Bitchie, the rapper disclosed his feelings about Black Hollywood and his goal for “The Body”:

I have honestly been sick and tired of our representation in the entertainment world. I feel like they curve “usâ€ as a whole, then every blue moon they allow a pass for a Black person and we’re supposed to throw a party for it.

When Jeremih and I did a video for my single, “The Body,â€ it hurt my soul coming to the realization that there is hardly any positivity in Black Hollywood. Years ago I wanted to do a short movie for a single, with legendary director John Singleton. I’m not sure if he didn’t believe in me or if he plain old didn’t have the time to do it, but it never happened.

“The Body,â€ was an attempt to get us, as Black people, headed in a more elevated direction. Mariah [the model I used in the video] kind of epitomized what I felt a normal beautiful “round the wayâ€ girl looked like.

Yes, I’m aware that my latest single is called “The Body.â€ I also am aware that we barely showed the body… Maybe, just maybe, I thought I could trick these dudes into looking a little deeper. And if only for one video, bring back the glory days of a more genuinely prestigious, “Black Hollywood.â€

Wale is not the only hip-hop artist who’s used music visuals as a tool to challenge the way we think about beauty standards. BlackEnterprise.com recapped Kendrick Lamar’s interview with Hot 97’s Miss Info in which he admitted to replacing the original model in his 2013 “Poetic Justice” video for a “darker-toned” girl. “It’s almost like a color blind industry where there’s only one type of appeal to the camera,” the Compton rapper said. “No disrespect, I love all women, period. But at the same time, I still feel like it needs that balance.”

See Wale’s video for “The Body” below.