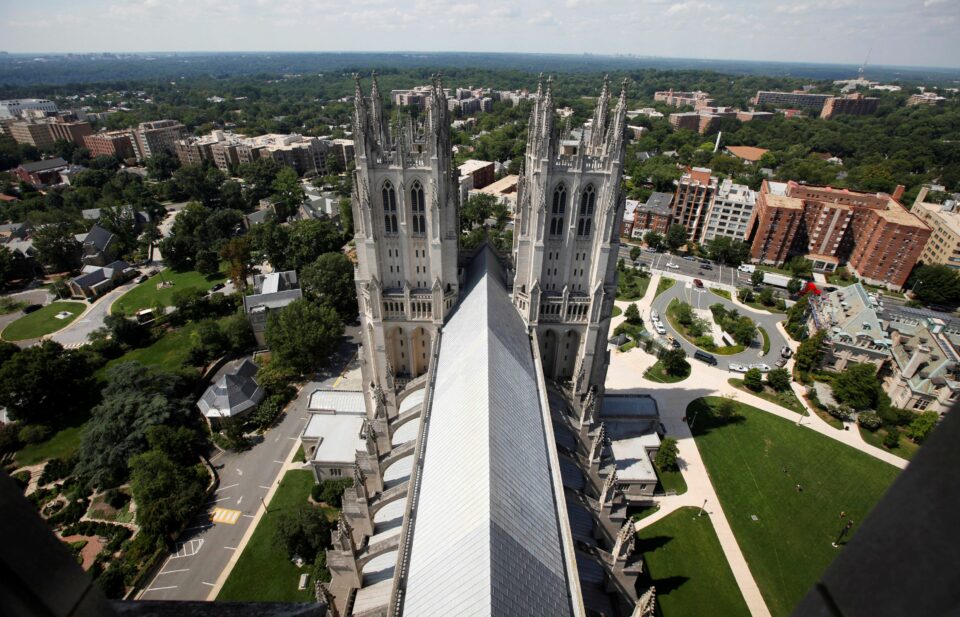 FILE PHOTO: The west front of Washington's National Cathedral is photographed from the damaged main tower after an earthquake August 24, 2011. REUTERS/Jason Reed

The announcement by the second largest U.S. cathedral comes a day after Richmond, Virginia, unveiled a new monument commemorating the end of slavery after pulling down a statue of Confederate General Robert E. Lee that had prompted protests over racial injustice.

The windows depicting Lee and Confederate General Thomas “Stonewall” Jackson “did nothing to address the reality and painful legacy of America’s original sin of slavery and racism,” the Rev. Randolph Marshall Hollerith, dean of the cathedral, said.

New windows created by artist Kerry James Marshall, a Black American man, will aim “to share a new and more complete story, to tell the truth about our past and to lift up who we aspire to be as a nation,” Hollerith said.

The “racial-justice themed” windows were expected to be completed in 2023 and permanently installed, said a cathedral spokesman.

The cathedral also announced that Elizabeth Alexander, a Black poet who spoke at then President Barack Obama’s inauguration, will write a new piece “that will be inscribed in stone tablets alongside Marshall’s window installation, overlaying the previous stone tablets which venerated the lives of Confederate soldiers.”

Artwork including statues honoring leaders of the Confederacy, the pro-slavery group of Southern states that seceded from the United States and fought in the 1861-65 Civil War, have become targets of anti-racism protests.

Earlier this month before a cheering crowd in Richmond, Virginia, the Confederate capital during the war, a towering statue of Lee was taken down. Its removal had been promised by the governor in June 2020, days after George Floyd, a Black man, was killed by a white police officer in Minneapolis, sparking nationwide demonstrations.

Another statue of Lee was taken down in Charlottesville in July, nearly four years after white supremacist protests over plans to remove it led to clashes in which a woman was run down by a car and killed.