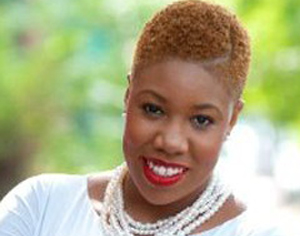 Symone Sanders Advice to Voters-SD(1) from Sonja Mack on Vimeo.

When Symone Sanders took stage at a campaign rally in Seattle to not only introduce Sen. Bernie Sanders, but to also announce her alignment with his presidential race, news headlines exploded in regards to who the Vermont senator’s latest campaign member was.

Sanders, who is of no relation to the senator, is a supporter of the Black Lives Matter movement and a young, black criminal justice advocate. At the young age of 25, she is the national youth chair of the Coalition for Juvenile Justice, and prior to joining Sen. Sanders campaign she worked as a communications officer for Public Citizen’s Global Trade Watch. While her position in the national spotlight may seem like one that happened overnight, Sanders makes it clear that her passion for the law and social reform dates back to her early childhood years in Nebraska.

“When I was 10 years old, we had the opportunity to have mentors at the school I went to,” Sanders tells BlackEnterprise.com. “They came into the classroom and said, ‘Write down whoever you want for a mentor and we’ll get them.’ I wrote down I wanted a judge, not thinking I’d get a judge, and I got two federal court judges as mentors.”

While Sanders desire to be a judge slowly faded, her love for law, communications, and politics remained high. At 11, she ran a campaign to become president for her local Girls, Inc. affiliate and won. In college, at Creighton University, she interned for the mayor of Omaha, Nebraska and later worked part-time at a political consulting firm called Little Smith’s Strategies. She says her opportunity to work as Sen. Sanders national press secretary came after someone forwarded her resume to the head of his campaign. After two conversations with senior staff members, Sanders finally met with the presidential candidate. After talking for over an hour and a half about everything from education to Sandra Bland, climate change, and trade, Sanders was offered the position on the spot.

With just a few months on the job, the pressure is on to see what impact young Sanders will have on Sen. Sanders campaign, and what she and the presidential hopeful will do to address the racial and social issues that face us today.

BlackEnterprise.com: What are your thoughts on the Black Lives Matter protests that have taken place at several campaign rallies? Do you believe them to be effective?
Sanders: You know, I don’t know if they’re effective or ineffective, or even what the motives of the protesters are. But what I will say is, I think the issues that activists across the country–that are associated with the Black Lives Matter movement–are raising are important issues. I definitely think they’re issues that people care about, and they’re causing people to pay attention.

So I definitely think the issues that the Black Lives Matter movement is raising are important issues. We have had conversations with Black Lives Matter activists and they have given us feedback on our policy platform. We’re open to hearing from them, you know, we have an open door. And I think that’s definitely what’s needed, just as we’ve reached out to other constituents.