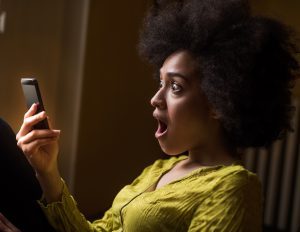 This week in tech racism looks at disturbingly racist videos gone viral in just this past week; racism out of South Africa; and more news on racial issues in the world of science and technology.

Twitter Storm Erupts After Image of Receipt With ‘2 Blacks’

A Johannesberg physician posted an image on Twitter of his restaurant receipt, which had “2 Blacksâ€ typed on it, apparently describing both himself and his companion.

The Bungalow in Clifton (@KoveCollection) still sees us by the colour of our skin pic.twitter.com/KuHi96xX82

Twitter erupted with many accusations of racism in Cape Town, South Africa, where the restaurant is located.

Google search has been criticized for having a faulty algorithm that skews towards racism. For instance, in the past, a Google Images search for “black people” would turn up pictures of chimpanzees and apes.

Users have now discovered that the top search result for “Are black people smart?â€ is a racist posting on an obscure blog, according to indy100.com. Google has admitted that, when it comes to racism and search, “This is a really challenging problem.â€

YouTube star Adam Saleh was asked to leave a Delta flight, allegedly because another passenger overheard him speaking Arabic while talking on the phone to his mother, reports Vox. The digital publication also addresses allegations that the video is a hoax, because Saleh is famous for his internet pranks.

Another Act of Racism Gone Viral

A Kentucky woman went on tirade against Hispanic shoppers, shouting, “Go back wherever the f*ck you come from,” among otherÂ incendiary, racist comments, reports RawStory. A Facebook user posted the video after filming the incident, and it went viral.

And Sadly, Another Racist Viral Video

Police in Fort Worth, Texas violently arrested a black mother and her daughter. The mother had called the police following an incident in which a man allegedly choked her seven-year-old son. Sparking outrage across social media, the video has gone viral and has also been covered by national news networks.

Baron Davis Is Leveraging Data to Build His Character Franchise