What You Need To Know About This Black Hair Millionaire 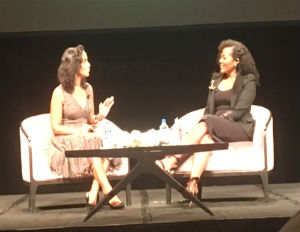 Day 3 of the Black Enterprise Entrepreneurs Summit kicked off with high energy and the vibrating spirit of entrepreneurship. The morning started with an inspiring one-on-one conversation featuring the Co-Founder and CEO of Miss Jessie’s L.L.C., Miko Branch.

Branch sat with the Editorial Director of Black Enterprise Women of Power Summit and host of Women of Power TV Show, Caroline Clarke for an in-depth “Master Class in Entrepreneurship.”

“I realized that I need to choose something that I love. I defaulted to something I was naturally good at, which is hair, and the rest is history,â€ says Branch on deciding to take on
entrepreneurship. “Before we [Branch and sister Titi Branch] opened the shop, we had to rely on God-given talent. I was great at hair, and Titi was a great communicator, so I did the hair and she did the outreach.â€

Miko and Titi didn’t rely on or have access to funding, and investors when starting Miss Jessie’s. They relied on the resources they had readily accessible to them and capitalized from that space.

“The Internet was a huge tool for Miss Jessie’s, we wouldn’t have this level of success without the Internet,â€ says Branch on the initial marketing of Miss Jessie’s products.

“It comes down to common sense. Without business school and mentors, common sense goes a long way,â€ Branch stated about mapping business moves and accepting deals for the Miss Jessie’s brand.