Where Are the Black Teachers? 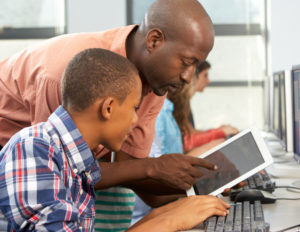 I recently wrote about a study that showed that having just one black teacher can have far-reaching positive effects on black children, particularly low-income black boys. According to the study, such children were far less likely to drop out of school and more likely to go to college.

Maybe because some of them are teachers like my friend Nel, who taught many years ago. She told me about a boy at her school who complained of a headache and was being sent home. The white teachers were ready to call his mother, but Nellie sat down and asked him what the “real deal” was. It turns out he wasn’t sick at all—he just didn’t like his teacher. Nellie gave him a bit of a pep talk and instructed him to go back to class. His “headache” disappeared. “The kids get over on the white teachers,” Nellie told me.

In spite of the benefits of having black teachers, their number has been declining at least since 2002. And according to a new study, it isn’t just because black teachers are leaving education. There is evidence of discrimination.

Here’s an excerpt of an article by Marilyn Rhames, a Chicago educator, blogger, and former journalist, that discusses this issue.

Is it possible for a school to change the trajectory of low-income black students’ lives while denying people who look like their aunts, uncles, mothers, and fathers the opportunity to teach at the school?

In other words, what is the long-term effect of a school system that seeks to inspire low-income black students to dream big but sees little value in exposing them to educators who share their cultural experience?

Is it realistic, then, to expect black students to aspire to become teachers when they can rightfully doubt that they’d ever be hired at their own school?

I’ve been asking these probing questions for years, so I almost shouted “Hallelujah!” when I came across the new report, “Where Are All the Black Teachers? Discrimination in the Teacher Labor Market,” published in the Harvard Educational Review.

According to the study, “Black applicants were significantly less likely than their white counterparts to receive a job offer. Further, they find evidence of workforce segregation: when hired, black teachers were significantly more likely to be placed in schools with large populations of children of color and children in poverty or schools characterized as struggling.”

While the George Mason University researchers refused to name the school district they cited in the study, current and former school officials confirmed in a Washington Post article that it was Fairfax County Public Schools, a high-performing, wealthy, and large district in the Washington, D.C., region with 15,700 teachers serving 188,000 students—10% of whom are black.

According to the study, black teacher candidates in Fairfax County Public Schools were more likely to have advanced degrees, such as a master’s, and almost two more years of school teaching experience than white teacher candidates.