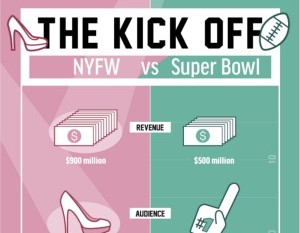 Believe it or not, there are several similarities between New York Fashion Week and the Super Bowl. Both events generateÂ millions of dollars. Both fashion and football attract a cult following. And it should come as no surprise that social media, primarily Twitter and Instagram, are the best ways to stay up to date with what’s happeningÂ on the field and the runway.

But when it comes down to dollars and cents, Fashion Week beats the Super Bowl, “bringing in about 2x the revenue than the Super Bowl,” according toÂ Stylight, a fashion-focused site out of Germany. “The New York Fashion Weeks (Spring and Fall) in total boast a whopping $900 million.” Additionally, Â Stylight reports, the fashion industry as a whole employs more than 180,000 people, which pays $11 billion in wages and generates about $2 billion in tax revenue per year, according to Congresswoman Carolyn Maloney.

On the heels of New York’s most exclusive event–Fashion Week F/W16 and America’s No. 1 sport–Super Bowl 50, Stylight.com compiled a pretty cool infographic which breaks down seven facts about the revenue, audience, publicity and expenses. Check out a snapshot of a few other findings below: