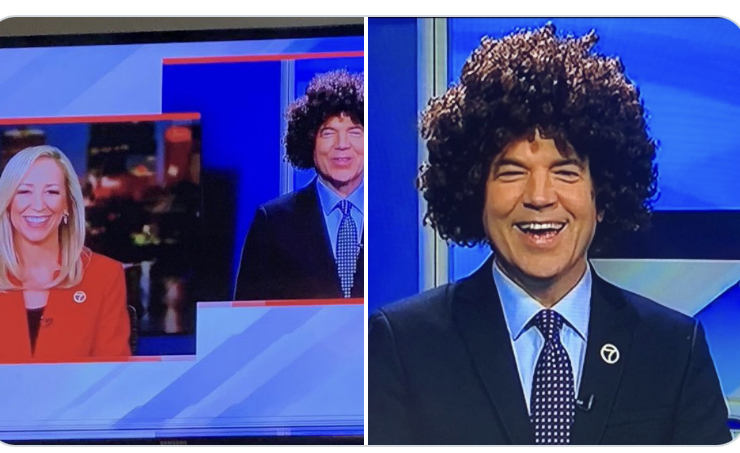 Two White journalists working at a local television station wore afros on-air as a part of a “back to the 70’s segment.”

According to the Washington Post, the news personalities in Little Rock, Arkansas station KATV came up with the idea as a way to demonstrate that the temperatures were dropping to the 70’s after several days of hot temperatures. The two decided to wear afro wigs on-air.

After backlash, the TV station which is owned by Sinclair Broadcast Group, apologized for the “poor judgment” that led to the segment. TV executives fired the station’s news director, Nick Genty, and indefinitely suspended Chris May and Barry Brandt, the anchor and meteorologist who wore the wigs.

“It was just bad judgment,” John Seabers, a Sinclair vice president and group manager, told the outlet. “It was a spoof on the ’70s that just went wrong.”

This is beyond disappointing @KATV. I talked to local journalists and members of the Black community traumatized by talent’s decision to wear afros on air. I am more concerned by an apparent culture that gives air to demeaning acts. This cannot continue. @nabj @NABJBroadcastTF pic.twitter.com/abzU4Phoke

The incident highlights a larger problem surrounding newsrooms across America. Newsrooms across the nation lack diversity among journalists and managers. It is an issue addressed often by the National Association of Black Journalists, who have spoken out against newsrooms’ hiring practices and apathy toward inclusion.

The Pew Research finds that newsrooms around the country are less diverse than the U.S. workforce as a whole and have been for decades.

The push for diversity in newsrooms appears to be falling on deaf ears. According to the Washington Post, even as there were claims to take an meaningful approach to hire Black journalists following the murder of George Floyd, it has not transpired.

“Just as protesters have been galvanized by Floyd’s death to demand reform, journalists have sought to do the same within their own workplaces,” The Post reported in the weeks after Floyd was killed.

Months later in October 2020, less than half of global newsroom leaders surveyed by the Reuters Institute reported doing a good job with “ethnic diversity,” compared with 80 percent when it came to “gender diversity.”

According to KATV, “We apologize to all viewers who were rightfully offended by the segment and we promise to enact and enforce new measures to prevent future incidents from occurring,” Seabers wrote in a statement.”