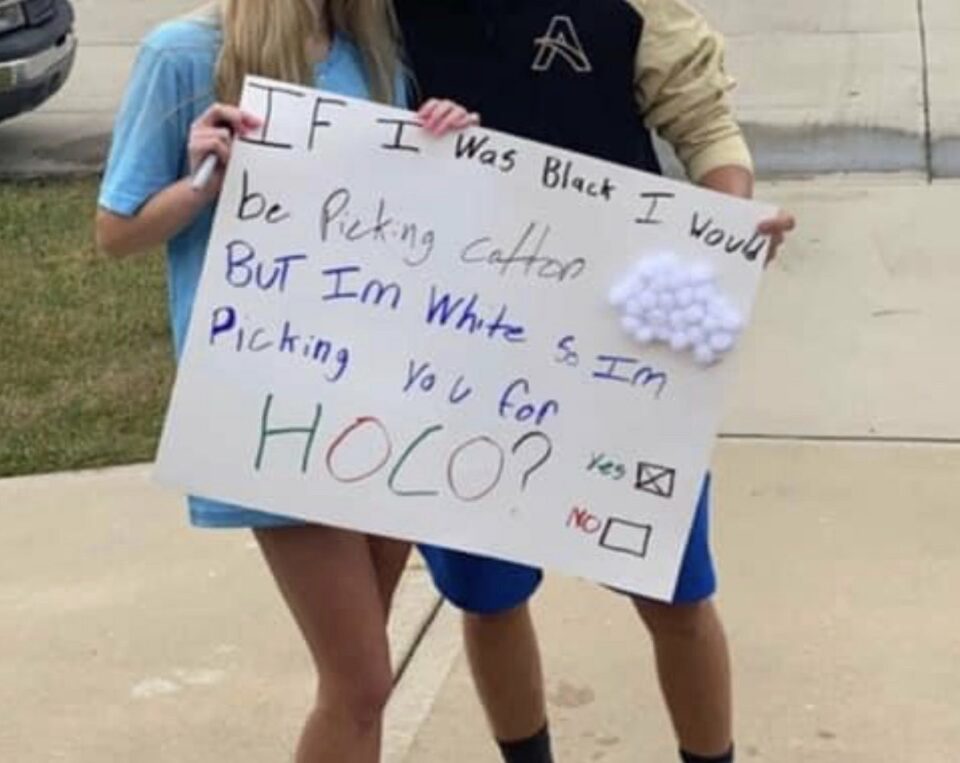 A high school in Kansas City is under fire after two of its white students went viral for posing with a racist homecoming sign.

Olathe South High School is investigating the racist incident that occurred on Friday, KSHB reports. A student posted a photo of the sign he presented to his date asking her to their homecoming dance.

“If I was Black, I would be picking cotton, but I’m white so I’m picking you” for homecoming, the racist sign read.

This photo of an Olathe South student’s homecoming sign has been going around social media all weekend. @kmbc

It reads: “If I was Black I would be picking cotton, but I'm White so I'm picking you for HOCO.”

At 9 & 10 we’ll hear from a parent and an aunt—who are both outraged. pic.twitter.com/lkBDleogyC

But after the photo received backlash online, the school moved swiftly to rectify the issue and sent an email out to parents saying they were aware of the “offensive” post.

“I felt it was important to share that we are working to thoroughly investigate the situation and contact all parties involved, including student guardians,” Olathe South Principal Dale Longenecker wrote.

“At Olathe South and in the Olathe Public Schools, we are committed to creating an inclusive and safe environment for ALL our students.”

However, the mother of the girl photographed holding the sign says her daughter had no idea the sign was racist and was just excited to be asked to the dance. She even called out the Black child who she says made the racist sign.

“This by no means makes it right but should shed some light on the situation.”

“Caught up in the excitement of being asked to her first ever homecoming, our daughter held the sign that was given to her,” she continued. “It was only after actually comprehending the situation, that she realized what was happening. She blatantly said no!! By then, it was too late.”

She went on to apologize to any and all who were offended by the sign and noted how her family stands for diversity and believes “All Lives Matter.”

“Please know that we have diversity in our own family and believe that all lives matter,” she said. “We have received many death threats and numerous people have told our daughter to kill herself.”

Not sure if Rhonda knows that All Lives Matter is seen as a backhanded jab at the Black Lives Matter movement.