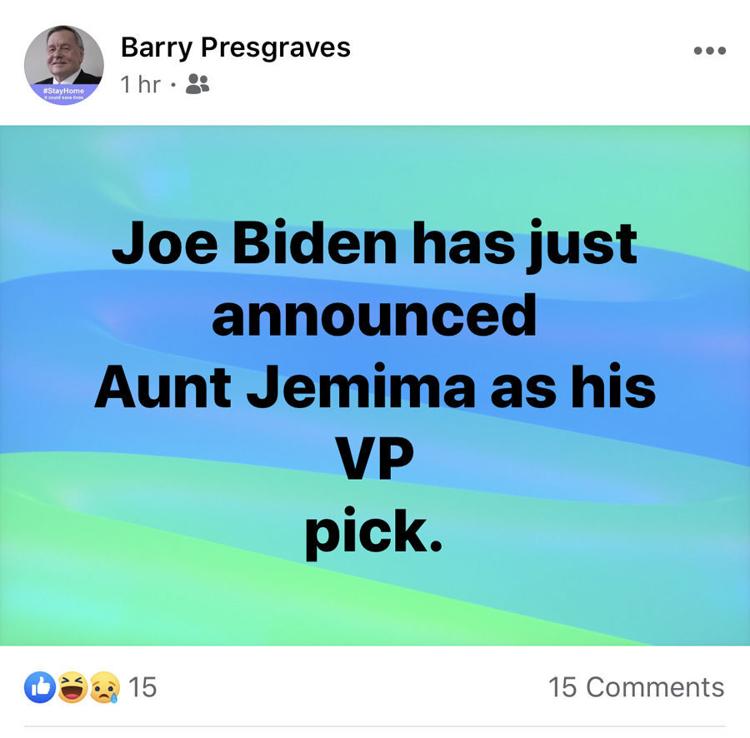 Critics says the mayor’s post is racist and sexist and are calling for him to resign.

“I am writing to strongly urge you to resign over a racist comment you made on Facebook,” wrote Luray council member Leah Pence in an email to the three-term mayor, WTOP reported. “The comment you posted has a type of humor that has not been appropriate or funny in my lifetime or yours. While a resignation alone will not resolve the systemic subliminal racism that plagues our community, your resignation is imperative as we work towards ending racism in our community.”

Pence added that she and many residents of the town have lost faith in his ability to effectively lead. In addition, the Valley Region Caucus of the Virginia Young Democrats wrote that: “Idiotic racism can not be normalized.”

Presgraves, who has served as mayor since 2008 and is not seeking reelection, fiercely rejected calls to step down.

“Hell no, I’m not resigning,” he told the local outlet Page Valley News on Monday. “The people elected me and I have a few months more to serve.”

Presgraves insisted that he did not intend for his remarks to be racist and described Aunt Jemima as “a prominent woman who made pancake batter.” The mayor also scolded Quaker Oats for moving to remove the image of Aunt Jemima from its brand last month after acknowledging that the logo is “based on a racial stereotype.”

“The company was forced to take it off, which was wrong,” Presgraves said. “I don’t even depict that as racist. I ate Aunt Jemima all my life.”

“This was no more racist than the names I’ve been called. I don’t have a racist bone in my body.” Presegraves added that he had “no idea people would react the way they did” though “if I had a chance to do it over again, I wouldn’t do it. You can apologize all you want, but no one will believe it.”

Luray has a population of 4,895, according to the 2010 Census. Ninety-two percent of the community is white and less than 4 percent is Black.