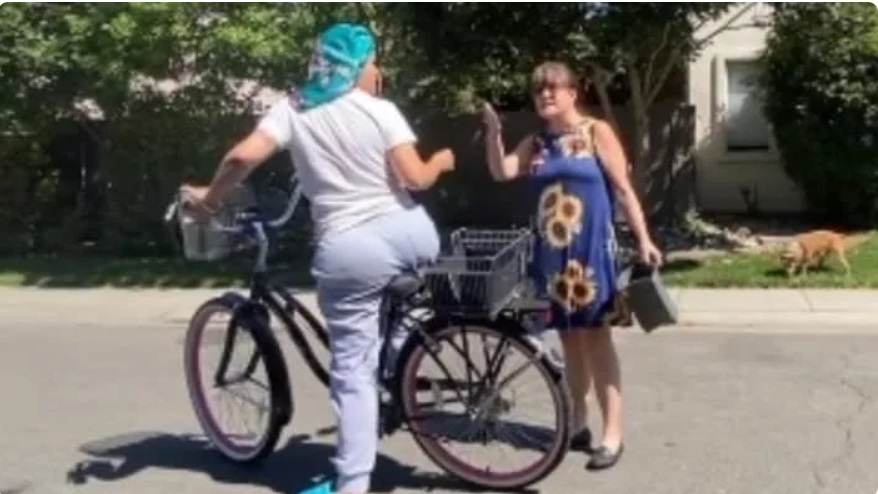 Ronnie Marie Paiva (left), delivering items to a customer on her bicycle, was confronted recently by an unnamed woman (right) who said it looked like she was dealing drugs. (TikTok)

At this point, we’re all aware that Karens are going to Karen. In the latest case of “Karens Doing Karen Things,” a white woman in Sacramento was caught on video harassing a Black business owner and asking if she was selling drugs.

Ronnie Marie Paiva, the owner of Marie’s Luxury Hair Extensions, was just making a delivery to a client on her bicycle, Yahoo News reports. A TikTok user under the name @prettii_tb captured the moment Paiva came to deliver her haircare products but was almost stopped by a white woman who just couldn’t mind her business.

The video shows Paiva approaching the customer, but a white woman comes and says she’s giving her a “head’s up” that it looks like she’s doing “a drug deal.” Paiva tells the woman to call the police if she’s doing anything wrong and informs her that she is a homeowner in the area who pays $50,000 in taxes.

However, the white woman asks Paiva why she won’t just operate her business at home and not at the public park she rode her bike to.

“Because I can. It’s a public park,” Paiva exclaimed.

After showing the white woman the haircare products inside of her bike’s basket, the woman can be heard telling Paiva that others in the neighborhood have complained about “the girl on the bike selling drugs.”

Paiva has since received swarms of support from those who watched the video and felt sympathy for the Black business owner. She has been in business for seven years and shared an update thanking everyone for their support.

“Jesus turned into a moment for His Glory,” Paiva told The Grio. “Because when you know who you are, where you came from, and where you’re headed … you don’t let anymore take you out of your character.”