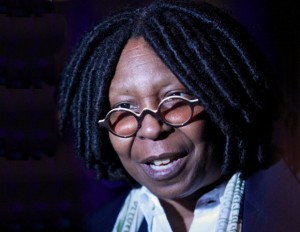 From Executive Producer Whoppi Goldberg comes a new a series about transgender models breaking down barriers in the industry. The Oxygen network has greenlitÂ  Strut, which follows a set of driven and determined models pursuing their passion ofÂ becoming household names in the world of fashion, while challenging stereotypes of gender and beauty. Supporting them every step of the way is Slay Model Management, the world’s first exclusively transgender modeling agency. Strut is produced by Goldberg’s One Ho Productions company along with 44 Blue Productions.

“This show is important right now, because for all of the positive advances the community has made and continues to make, transgender is still a hot-button word that gets people hysterical,â€ Goldberg said in a statement. “People tend to focus on the stereotype instead of the person, and this series will give viewers a unique opportunity to spend time with real people who are struggling with the same challenges we all face as we make our way through the world. You may even be surprised to discover that you have been seeing and interacting with transgender men and women in ways you didn’t even realize!â€

[Related: Tracy Norman First Black Transgender Model Was The Face of Clairol in the 1970s]

Oxygen’s executive vice president of Original Programming and Development, Rod Aissa, added: “Strut follows a group of inspiring and resilient trailblazers who are working to change the modeling industry and the world around them, by simply being true to themselves. These individuals will empower viewers as they live their lives fully and unapologetically, despite facing many obstacles throughout their journey.â€

Strut is not the first time Goldberg has tackled LGBT issues within a show she produced. The HBO documentary Whoopi Goldberg Presents Moms Mabley explored the career of one of Goldberg’s earliest comedy heroes, veteran standup Jackie “Moms” Mabley. The 20th-century trailblazer, and later a civil rights activist, was known for a so-what attitude, her edgy humor and dressing like your grandma. The first female comedian to be featured at the Apollo, Mabley was also known to be a lesbian, a topic discussed in Goldberg’s documentary.

Being transgender is becoming increasing visible on television with Laverne Cox earning accolades and awards for her work on Orange Is the New Black.Â Jeffrey Tambor has also racked up awards for his portrayal of a transgender woman on Amazon’s Transparent.

Oxygen’s sister network E! has found success with the docuseries I Am Cait, focused on Caitlyn Jenner’sÂ post-gender transition journey. TLC has the docuseries I Am Jazz centered on transgender teen Jazz Jennings. Last year, America’s Next Top ModelÂ – which is preparing for a VH1 reboot – crowned its first-ever transgender winner. Public Television portrayed trans women who reign in Africa’s Cape Verde Islands by airing the documentary Tchindas, which will screen in New York during Pride Month at the My True Colors Festival as part of its “T-Dayâ€ lineup.

[Related: Watch Being Black and Transgender]