Everyone Should Care About Net Neutrality 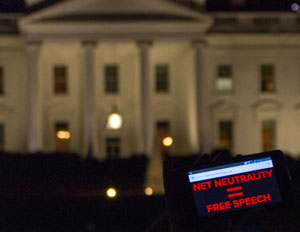 Competition that cannot afford to be in the fast lane will be essentially priced out, leaving the playing field available only to incumbents or companies with major financial backing.

Craig Settles, Broadband industry analyst and host of the Gigabit Nation radio talk show, spoke to Black Enterprise about net neutrality and the ramifications of a tiered Internet decided by corporations. “If every website has to pay AT&T a toll, who’s going to benefit from that? Well the companies with money will benefit,” said Settles. “The folks without money will always be at a disadvantage. If it costs me money I may not be able to get online at all, or I may have to charge higher prices if I sell stuff, or any number of things that could happen.”

The business implications of a tiered Internet won’t just affect companies trying to compete with a handicap. It’ll trickle down to consumers as well. If a company like Netflix has to pay Comcast for faster access, it will have to recoup that money somehow. And it’ll recoup its investment through higher prices for the consumer.

Can’t afford the “fast laneâ€ package? Then you’re stuck with speeds that are already being under-delivered by your Internet provider.

“It’s basically allowing AT&T to create a tiered payment structure for playing, and that’s what will screw people. And it will screw Black folks even more because of the economics,” said Settles. “AT&T charges more money for the fast lane, who’s gonna be able to pay AT&T more money? If I can afford to pay them the more money as a mid-size or smaller company then I have to turn around and figure out some way to charge either advertisers or people who surf the net to come to my site money. Because I have to recoup that money I’m paying AT&T. The impact is really felt among those with fewer resources, those with less money. ”

The effect of a tiered internet could find its way into actual communities as well. where more people are paying for priority access, more resources will be allocated, leaving those in poorer communities to deal with an aging system.

Don’t believe that money influences where cable companies exist? In some rural and poor communities, there is no Internet provider because it’s not cost-effective for companies to build out their infrastructure to those areas.

You will find more statistics at Statista

Prioritizing content is great for only one party: cable companies.

The rules have yet to be decided, however. The FCC will not make a decision until 2015 due to the complexity of the issue. If you want to let them know that an Internet not controlled by corporate interests is what you want, you can let them know on the FCC’s comments page. Chairman Wheeler says the organization will take these comments into consideration when making a decision.