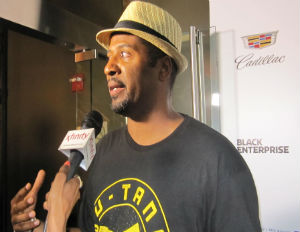 With ABFF taking place June 11-14 in New York City, the contest challenges filmmakers to create a 90 second to 2 minute video showing the concept of love. The winner will receive $2,500 in filmmaking equipment, a screening at ABFF along with three other finalists, placement of their project on McDonald’s 365black.com Website and a private mentoring luncheon with Lee.

It’s a theme that Lee has become known to promote in his years in Hollywood. As a teenager he worked with his early mentor and cousin, Spike Lee, on films that showed a love for the African American community, music and culture.

Malcolm Lee channeled his personal affection for writing and film into a career that brought acclaim with his 1999 debut The Best Man. The hit movie exceeded expectations, leading him to direct a slew of memorable movies such as Roll Bounce, Soul Men, Welcome Home, Roscoe Jenkins, and 2014’s Best Man Holiday. The sequel to his debut went on to garnering over $30 Million its opening Box Office weekend and over $70 Million to date. With a third installment The Best Man Wedding, slated to hit theaters in 2016, Lee — who’s taught filmmaking classes and lectured at NYU — always remembers one of the keys to his success: Mentorship.

Black Enterprise: When you think of mentors and mentorship, who or what comes to mind?

Malcolm D. Lee: I think obviously Spike is a huge mentor from the time I was 13 telling me to make black film. He got to produce my first picture, The Best Man and even most recently advised me on something. in addition to him, Stan Lathan, Preston Holmes, and a number I’ve called upon. But more so than mentorship, there’s a fraternity among directors. Even if we’ve never seen one another before, I can call on people and say, ‘I have this photographer and actor I want to work with.Â  What was your experience?’ Because they know what it’s like to have a vision and execute that vision as flawlessly as possible. And you want the right partners on that journey. So for me, to have the opportunity to mentor young filmmaker is a great opportunity.

What do you wish someone had told you about the business before you got into it?

You never know when your next job is going to be. No matter how successful or unsuccessful the last one was, make sure you can put yourself in the position to make your next movies. Don’t necessarily say no to things that are against your philosophy at the time. I said no to plenty, because I thought I was going to be ‘x’ kind of director. Â And that’s limiting yourself and also could mess your career up. You could be a in a position where you do nothing. Audiences, tastes changes, investor appetites change for what they think is viable or what will make money. But at the same time, you have to be able to say, ‘I believe in this. This is what I’m going to do.’ It’s a tough balance. So when things come to you, don’t immediately dismiss it if it doesn’t fit your exact paradigm. Always take advantage of every opportunity. Even if you’re just going to meet the investors, there might be something else they have that might be of value to you or that you might want to do. Don’t be so quick to judge. And that goes across the board — script writer, actor, producer, you never know.

Studying their craft. Be really passionate. Don’t give up. There’s a lot of perseverance and patience in this business and not everybody is cut out for it because they think it’s going to happen overnight or immediately. They’ll say, ‘My stuff is better than what’s on the screen right now.’ I’ve had that thought go across my mind. But you have to take the opportunities. You have to be prepared and ready for anything that comes and be passionate about the story you want to tell. Because if you have a unique story or unique way of telling it, then you’re going to get that shot. Because by age 25 I was in my second year of film school and felt like I was a failure like, ‘John Singleton made boys in the hood at 22.’ It’s supposed to happen when it’s supposed to happen. People just have to keep plugging away. If it’s something people are connecting to then you have to readjust or wait around till you find the right person who does understand or does connect with it. You’re going to hear, ‘no’ a lot more than you’re going to hear yes. But all you need is one, ‘Yes.’

What’s the question that you’re always asked, and what’s the advice you always give?

They always ask, ‘How does somebody like me get a shot?’ I tell them that there’s not one way. It happens how it’s supposed to happen. You’ve got to keep pushing forward on the vision you have and believe. You have to take advice from people. If [someone says], ‘I don’t understand this part,’ and it’s a consistent thing people are saying, you have to examine that. You have to get people around you who are going to be honest. You want your supporters and people that are going to uplift you, but you don’t want yes men and women around you. … You have to be able to take criticism.