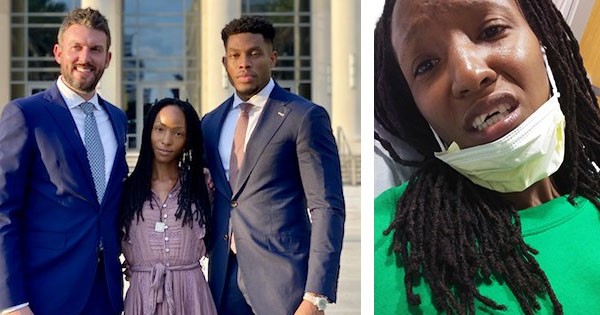 A woman from Jacksonville, Florida, who was facing up to 10 years in prison for felony battery on a law enforcement officer has been found not guilty after Jacksonville Police broke her teeth during her arrest.

Brittany Chrishawn Williams, however, was found guilty by the jury of a misdemeanor charge for resisting an officer without violence. She has been sentenced to 6 months probation and must undergo a mental health evaluation and anger management. She has also been required to write a letter of apology to the arresting officer that injured her, Officer C.N. Padgett.

The incident began May 13, 2020, and went viral last year after parts of the police body-worn camera were released and circulated online. The footage shows JSO officer, A. Carmona, parked in the driveway of Brittany Chrishawn Williams’ home. According to the officer, he was checking emails when she asked him to leave. The officer said she “immediately threw a spoon with an unknown green substance on it at me while I was sitting in my car” which she is now found innocent of.

Back in December, it was reported that Williams “has for months claimed she was wrongfully charged with battering two officers and resisting arrest. In fact, Brittany Chrishawn Williams says it was she who was manhandled by deputies after she asked a deputy parked in her driveway to leave and he took umbrage. Williams, a 30-year old Black film producer and musician, publicly released bodycam video from her May 13 arrest this month. She and her attorneys believe the video proves her brutality claims.”

“We believe there are a lot of things the judge allowed into evidence which completely changed the direction of the trial. Although she was only convicted of a misdemeanor, we believe if the judge had not allowed in certain evidence, the jury would have returned a not guilty on all charges,” said Jeff Chukwuma, one of Brittany Chrishawn Williams’ criminal attorneys from CHR Law Group.

Attorneys Jeff Chukwuma and Landon Ray filed a 38-page motion for a new trial on September 17th, exactly one week after the sentencing hearing, because they believe the judge was biased and their client did not receive a fair trial.

“As far as the actual sentence today, we have to keep in mind that Ms. Williams has never been in trouble in her life. She’s never even received a parking ticket,” Chukwuma said.

Attorney Jeff Chukwuma also noted that Brittany Chrishawn Williams had no prior criminal record and now has permanent nerve damage in her arm from the incident.