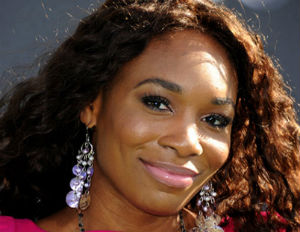 Tennis phenom Venus Williams has broken records, become an entrepreneur with her interior design business and fashion line, and even a successful franchisor. She has also overcome tremendous challenges, managing an auto-immune illness,Â SjÃ¶gren’s syndrome, injuries and losses.

As a keynote speaker at the Black Enterprise Women of Power Summit, sponsored by State Farm, Williams talked with Black Enterprise editorial director Sonia Alleyne about having a champion attitude and work ethic, inspiring the many power women attendees.

Check out highlights from the discussion:

On her fierce drive for excellence: I can’t sit still, so I always have to be doing something… always achieving something. … [My sister and I] are unapologetic… we’re confident.

I’ve had no apologies for how I felt about myself, and I definitely don’t regret that because as a young African American woman, that’s an advantage to feel that way about yourself.

On sisterhood and competition: We dreamed of playing each other in the Finals…For us, it’s very special. Just to be able to know that Williams take all is great too. [Laughs]. There have been times where we’ve played in the Final at Wimbleton on multiple occasions, then we had to turn around and an hour and a half later play the Doubles Finals…. so it’s like, if you have any issues, you need to let them go. [Laughs]. But we wouldn’t really have any issues as that point … So that’s the kind of relationship we have before our matches.

On being raised to defeat the odds: It was a lot of fun [growing up], but there were a lot of expectations in terms of how we speak and behave. My dad always told us our goal was to be the most polite people in the world. … You were never allowed to say ‘I don’t know,’ and he taught us to be independent and to think for ourselves.

My father put everything into Serena and I being professionals. … He was definitely a visionary, and how he did it, I don’t know. Obviously, my mom was right there with him. I’m grateful.

My mom is very fair… She’d be at the matches clapping for our opponents when they hit a good shot, and I’d say ‘Mom, why would you do that? Why does she wanna win against me?’ And she’d say, ‘Aren’t they allowed to want to win?’ and I’m like, ‘No!’ [Laughs.]

On pursuing entrepreneurship: My dad would say, ‘It’s always good to have an idea,’ and I think my first job was delivering phone books. I was so young, like 3 or 4, but I thought it was fun. That was my first entrepreneurial job.Â [Laughs]

Since people know you, you can get your foot in the door, but that doesn’t mean you’re going to get the job. I’ve been in some meetings, where, V Starr Interiors, our interior design company, we were transitioning from residential to commercial, and we’re taking all these meetings where we had no jobs. Â So we got a meeting, and we had these color brochures, and the guy looked at them and said, “This isn’t good enough,” and threw them across the table. And we’re thinking, “Can we get those brochures back?” [Laughs] So, we started at the bottom, and you have to show that you’re worthy, and eventually we did get a job. You face those challenges, and as an athlete, people don’t necessarily think you can do anything else, so to transition, for me, has been important, while I’m still playing, because I have opportunities to get my foot in the door, but I have to prove myself.

[Jamba Juice] franchising was an opportunity that I wasn’t really expecting, but when it came, it was exciting and something I wanted to move on. It’s been wonderful.

On pushing through injuries and managing SjÃ¶gren’s syndrome: In the summer of 2011, I just ended up getting sick. Eventually, I got diagnosed and ended up missing quite a bit of the tour. My ranking dropped … and a lot of other [not-so-great] things happened.

It was actually Serena’s idea for me to go to a health center, and I signed up. … My whole family got involved. I’ve changed my diet for the most part, learned a lot and changed a lot. I’ve tried many different things, and for me, traditional medicine—though it helped a lot—wasn’t enough… at least not to play a professional sport… so I had to [look into a variety of treatments.]

This past year, I [also] ended up injuring my back, so that took away my serve, which is one of the biggest parts of my game. … I was like, ‘What do I do, just pingpong?’ [Laughs]. I ended up losing a lot of confidence, so I had to figure out how to get that back. I saw so many tough losses… quite a few times… and every time, I had to get back up and go.

It really helped me because I had to get better. [The lesson is] when you lose, it’s not the end. A lot of times, it’s the beginning of something really great.