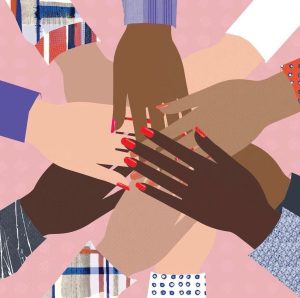 On Wednesday, March 8, thousands of women around the country refrained from going to work, doing household chores, and shopping at major companies in order to demonstrate the economic power and value of women workers as well as take a stand for women’s rights.

Although March 8 is typically observed as International Women’s Day, the organizers behind the monumental Women’s March on Washington launched a national protest called “A Day Without a Woman,â€ which encouraged women to take the day off from work and/or wear red. Many of those who were able to call out of work participated in rallies held in big cities like New York, Chicago, Los Angeles, and Washington, D.C. There were also hundreds of smaller demonstrations in other parts of the country.

During an act of civil disobedience, four organizers of the strike were arrested while blocking traffic outside Trump International Hotel in New York City. The organizers were Linda Sarsour, Tamika Mallory, Carmen Perez, and Bob Bland. Before she was arrested, Sarsour delivered a speech at the New York City demonstration, addressing critics who accused striking women of being only for “privileged” women.

“We honor the women who striked in the Montgomery bus boycott,” said Sarsour, according to NBC News. “Are those privileged women? What about the farm workers that said ‘We will not pick this produce without worker’s protections?’ Were those people privileged?” She added, “The movements that we are all a part of have always been led by those who have the most to lose. Social justice movements are not convenient.”

A number of celebrities also showed their solitary by posting on social media. Actress Kerry Washington, for example, shared a photo of herself rocking pin curls and a “Day Without a Woman” t-shirt on Twitter:

Meanwhile, Tracee Ellis Ross posted a photo on Instagram of her sporting a “Women’s Rights Are Human Rights” t-shirt: