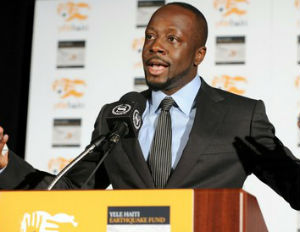 Wyclef Jean, the former Fugees rapper, has been doing media rounds for his new book, “Purpose: An Immigrant’s Story,â€ and discussing his childhood in Haiti, during which he said he grew up in a hut with a dirt floor.

In the wake of the devastating earthquake there in 2010, Jean famously set up a charity, called YelÃ©, for his native country. But after being beseiged by investigations by New York officials who say YelÃ©’s books were doctored and allegations from creditors who say they were never paid back, the nonprofit has essentially gone belly up.

And people on the ground say there’s little to show for all the money the organization spent in the troubled nation:

Even as YÃ©le is besieged by angry creditors, an examination of the charity indicates that millions in donations for earthquake victims went to its own offices, salaries, consultants’ fees and travel, to Mr. Jean’s brother-in-law for projects never realized, to materials for temporary houses never built and to accountants dealing with its legal troubles.

On the ground in Haiti, little lasting trace of YÃ©le’s presence can be discerned. The walled country estate leased for its headquarters, on which the charity lavished $600,000, is deserted. YÃ©le’s street cleaning crews have been disbanded. The YÃ©le-branded tents and tarps have mostly disintegrated; one camp leader said they had not seen YÃ©le, which is based in New York, since Mr. Jean was disqualified as a presidential candidate because he lives in Saddle River, N.J., not Haiti.

Read the full story at the New York Times.