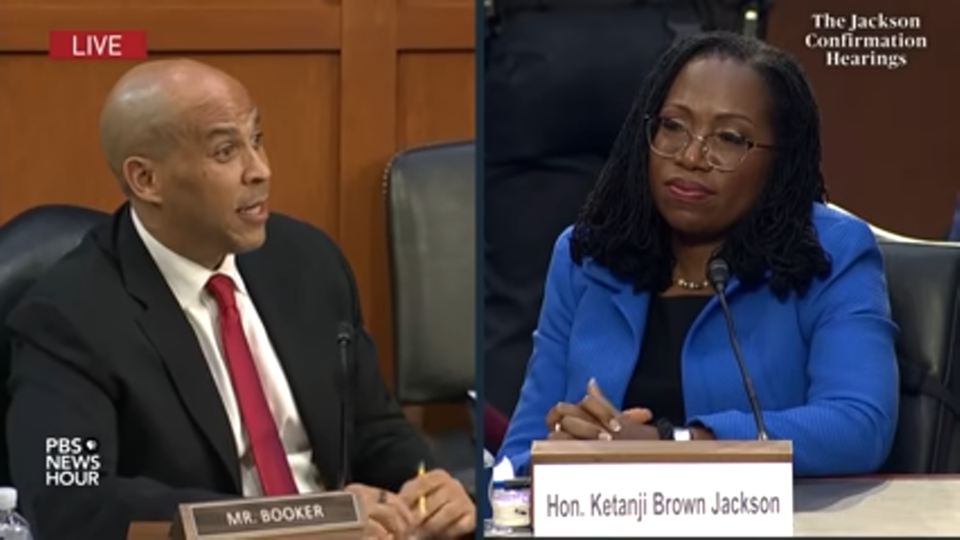 Sen. Cory Booker (D-N.J.) was brought to tears praising Ketanji Brown Jackson for making it through her confirmation. (Image: Youtube)

With Jackson smiling at him like they’re related, Booker told her she “is an extraordinary testament of what can be accomplished against the odds.”

“I want to tell you when I look at you, this is why I get emotional,” said Booker, the only Black member of the Senate committee and one of only three Black senators. “I’m sorry — you’re a person that is so much more than your race and gender.”

Booker became emotional at times, tearing up and talking breaks as he told Jackson she was worthy of being on the Supreme Court. He also blasted Republican senators including Josh Hawley (R-Mo.), who he called out by name for saying Jackson was ”appallingly soft on child pornography offenders.”

“Feel proud about yourself, you brought together left and right in this calling out of people that will sit up here and try to pull out from cases and try to put themselves in a position where they’re the defenders of our children, to a person who has children, to someone who goes out in streets and defends children, this is a new low.”

Booker talked for almost 20 minutes, even going back to the trials of Harriet Tubman, who escaped slavery, helped others escape and also helped Union troops during the Civil War.

“Today you are my star, you are my harbinger of hope,” Booker said towards the end of his speech. “And when that final vote happens and when you are sent up to the highest court in the land, I’m gonna rejoice and the United States of America will be better because of you.”

Booker was easily Jackson’s biggest cheerleader during the confirmation hearings. In his opening statement, he described meeting Jackson, how excited he was just to have her sit in his office and how historic it was that she was close to be the first Black woman on the High Court.