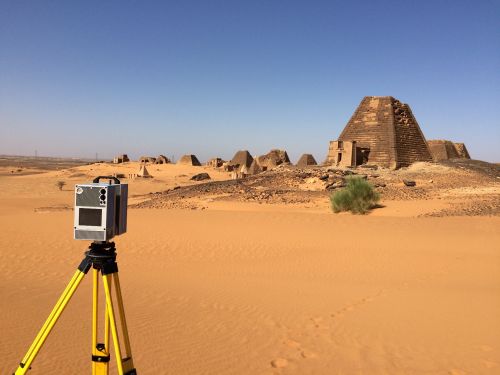 (Image: Zamani Project)
For decades, astrologists have tried to figure out different ways to conserve the history of our planet. The Zamani Project, based in South Africa at the University of Cape Town (UCT), has set out to create 3D models using data to capture historical sites in Africa.
Their mission, as stated on their site, is to create metrically accurate digital representations of African historical sites, in order to provide data for research and education, for restoration and conservation. Additionally, they want to increase awareness of tangible cultural heritage in Africa and internationally. Through the documentation of heritage sites, the Zamani Project aims to make a contribution to the fight against the damage and destruction of sites through war, political unrest, vandalism, art theft, climate change, sea-level rising, natural disasters, and natural deterioration.
Professor Heinz Rüther is behind the project and has ventured up and down the continent, visiting Ghana, Senegal, Mali, Cameroon, Egypt, Sudan, Ethiopia, Kenya, Tanzania, Uganda, Mozambique, Zimbabwe, Algeria, and South Africa, taking detailed records of the structures and condition of tombs, churches and other buildings, according to CNN. So far, they have mapped around 16 sites including Lalibela in Ethiopia, Timbuktu in Mali and Kilwa in Tanzania. “I’ve seen how sites are deteriorating visibly,” Rüther told CNN.
How does it work? The Zamani Project digitally captures spatial data of African heritage sites using laser scanning and GPS technology, photogrammetry, 3D modeling software, Geographic Information Systems and animation software. With these tools, the Zamani team produces 3D models, sections, plans, elevations, panoramas, panoramic tours, animations, and interactive virtual worlds that accurately capture the dimensions and architectural intricacies of the sites’ physical structures and surrounding topography.
The project is not-for-profit. Its operating costs are presently funded through the independent “Zamani African Cultural Heritage Sites Trust,” which was established by the philanthropist and UCT alumnus Duncan Saville. The site also states that funds for field work on individual sites have to be found on an ad hoc basis.