Loretta Lynch Wiki: 10 Facts About the Next US Attorney General 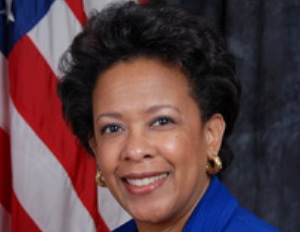 History is about to be made in the White House if President Obama gets his way. His current Attorney General, Eric Holder, is stepping down and the president has nominated U.S. Attorney for the Eastern District of New York, Loretta Lynch, to replace Holder. We have compiled some facts about the highly regarded lawyer, who, should be confirmed by the US Senate.

3. She will be the first African-American woman to hold this position if the Senate confirms her.

4. She holds a Bachelor of Arts in English and American literature from Harvard College in 1981 and a Juris Doctor from Harvard Law School in 1984.

5. Lynch prosecuted the Abner Louima case, the Hatian immigrant who was sodomized with a broom handle by New York City police in 1997.

6. Before returning to her role as U.S. Attorney, she was a partner in the New York office of Hogan & Hartson, L.L.P.

7. Before he was elected 54th Governor of New York in 2006, Attorney General Eliot Spitzer, asked LynchÂ to join him on the Democratic ticket for governor. She declined before he chose David Paterson.

8. It’s been reported that Lynch was selected by Eric Holder to take his place.

9. If Lynch is confirmed, it will be the first time in nearly 200 years that a president has elevated a United States attorney directly to attorney general.