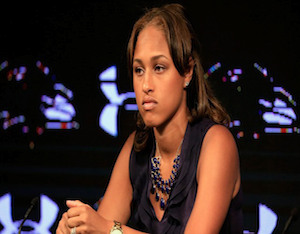 The events that transpired between Ray Rice and his then-fiancÃ©e, Janay Palmer, were shocking to the public when footage was nationally publicized.

As TMZ and ESPN documented every moment of the incident that took place inside of an Atlantic City casino elevator, the woman at the center of it all had stood by a man vilified by all for his actions. Despite very few words in lieu of the news conferences, television pundit’s closing remarks, and an NFL commissioner who was trying to keep a lid on it all, Palmer never spoke up about her part in the story—until now.

Over the weekend, Janay Rice, now married, sat down for an exclusive chat with ESPN’s Jemele Hill. The first-person account allows her to share recounts of the events and reveals feelings that the public may not known she had. Rice’s three-hour interview showed that she was not happy with then Baltimore Ravens’ orchestrated news conference back in May, and she was even more disheartened after the team let go her husband once the full video leaked online. Coincidentally, this story was published roughly at the same time an arbitrator announced that her husband’s indefinite NFL suspension was overturned.

Now, the former Pro Bowl running back is able to sign with any team that wishes to hire his services.

With NBC slated to feature the couple on the Today show for another exclusive interview, it seems that Janay and Ray are getting a second chance to change the public’s perception of them. But are they ready to feel differently about the two? If anything has changed between the two, does Janay Rice sharing her side of the story help shift the couple’s image?

We here at Black Enterprise were interested in the Rice family’s ordeal, so we decided to break down Janay’s first-person narrative in attempt to showcase some interesting tidbits we learned. If you haven’t checked out Janay Rice’s entire story, be sure to check out the must-read content by clicking here. On the following pages, we highlight the key points.