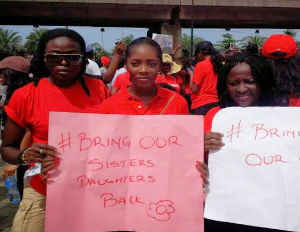 Last summer, my daughter got very sick. I cried every day for a week, unsure of what her future would hold.

Thank God, she’s OK now. But I cannot imagine the anguish mothers of the daughters kidnapped by the terrorist group Boko Haram have been going through. I was able to see my daughter every day, and because we have good health insurance through BLACK ENTERPRISE, she was seen by a specialist.

But it’s interesting that I was most concerned about my daughter’s future. In October, the Nigerian Army rescued 21 of the 200 girls snatched from the Chibok region of Nigeria. They’d been held in captivity since April 2014, but after such an ordeal what kind of future could these girls hope to have?

Thankfully, a black American billionaire, Robert Frederick Smith, is reportedly assisting 24 of the kidnapped girls in a tangible way that will help to ensure that they have a hope and a future.

Here’s an excerpt via Mic.

Two dozen NigerianÂ Chibok schoolgirls will have the opportunityÂ to restart their lives after surviving nearly two years of captivity under terrorist group Boko Haram thanks to the help of black billionaire Robert Frederick Smith,Â QuartzÂ reported last month.

Nigerian media announced that Smith, founder of the American private equity firm Vista Equity Partners, will be sponsoring the education of 24 Chibok schoolgirls, includingÂ 21 who were released in October. According to Garba Shehu, Nigeria’s presidential spokesman, Smith’s scholarships will sponsor the girls to attend the prestigious American University of Nigeria, Yola.

A Hope and a Future

“A black American billionaire, Mr. Robert Smith, who is currently sponsoring the education of 24 girls from Chibok, among them the first set of escapees from Boko Haram at the American University of Nigeria, Yola, has offered to pay for the education of the 21 released girls through negotiations and is offering to take responsibility for all the others who will hopefully be eventually set free,â€ Shehu said in a statement to Nigerian newspaperÂ Leadership.

Smith, the father of two young girls, first heard news of Boko Haram kidnapping the girls when driving his own children to school. He was shaken by the report, he told theÂ GuardianÂ in 2015; the lack of media coverage and international concern frustrated Smith even more.

How to Successfully Pitch a Venture Capitalist in One Minute