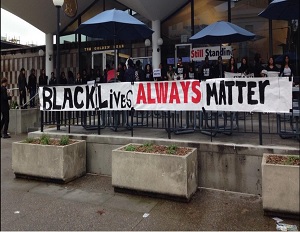 Since the acquittal of 17-year-0ld unarmed Trayvon Martin’s killer George Zimmerman in 2013, and the fatal police shooting of Michael Brown in Ferguson, Missouri in 2014, the phrase “black lives matterâ€ has become a rallying cry for a new chapter in the long, black freedom struggle. But this new movement’s penchant for disruptive protest and impassioned public speeches about persistent racial inequality have been disconcerting to many Americans who wonder what the end-game is for this new generation of protesters.

So, on its website, the organizers of #BlackLivesMatter are debunking a few myths about what the Black Lives Matter movement is and what it isn’t.

Here’s a breakdown of the first half of that listing:

Myth #3. The movement has no agenda. Since the earliest days of the movement in Ferguson, Missouri, groups like the Organization for Black Struggle, the Black Lives Matter network, and others have made both a clear and public list of demands. Those demands include swift and transparent legal investigation of all police shootings of black people; official governmental tracking of the number of citizens killed by police, disaggregated by race; the demilitarization of local police forces; and community accountability mechanisms for rogue police officers.

Myth #4. It’s a one-issue movement. Although it is true that much of the protesting to date has been centered on the issue of police brutality, there is a range of issues that the movement work will likely push in years to come. One is the issue of our failing system of public education, which is a virtual school-to-prison pipeline for many black youth. Another is the complete dismantling of the prison industrial complex.

Myth #5. The movement has no respect for elders. The BLM movement is an inter-generational movement. Certainly there have been schisms and battles between younger and older movers about tactics and strategies. If you ever have occasion to attend a protest action, you will see black people of all ages, from the very young to the very old, standing in solidarity with the work being done.