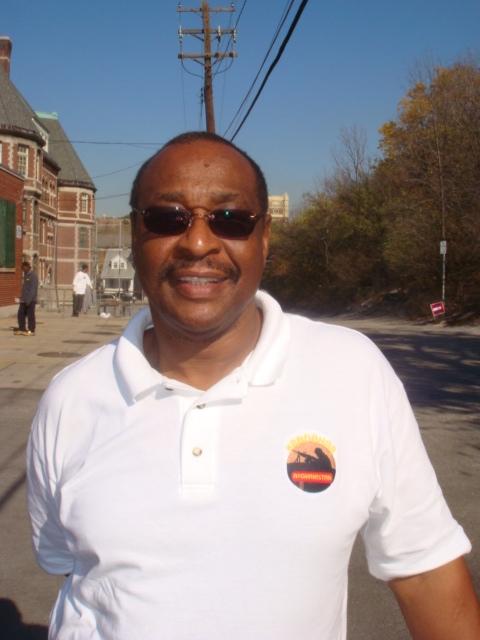 CINCINNATI, Ohio — Voters at Precinct 11-H and 11-F at Fairview Elementary School near the University of Cincinnati campus were greeted by 56 degree weather, sunny skies and swift entry.Â

For some, however making the trip to cast their ballot was a long, rocky road–literally.Â  For 57-year-old Deakin LaBrey, who works as a contractor for VSE Corporation in Kandarhar, Afghanistan, this is his second trip to this polling station.Â

Although he could’ve voted by absentee ballot, he decided to make theÂ more than 13,000 mile, six-day trip back home to Cincinnati to cast his ballot.

“I came back to vote in person because I was appalled at the number of my co-workers who are veterans, who fought for freedomÂ and still don’t vote,” said LaBrey.Â  “It is my duty as an American citizen and a Vietnam veteran to exerciseÂ my right in this historic election. I wanted to be a part of history by voting forÂ Barack.”Â

LaBrey traveled military flights from Kandarhar to Qatar.Â  It took three days to get a flight form Qatar to Ramstein Air Force Base in Frankfurt, Germany.Â  From Germany he flew to Ft. Lauderdale, Florida, with a one-night layover in Baltimore, then taking the train from Ft. Lauderdale to Miami International Airport.Â  From Miami he then went to visit his wife in Cali, Colombia.Â  He left his wife a week early to arrive before Election Day.Â

He was originally turned away by a poll worker and offered a provisional ballot because his voter registration card was returned to the Board of Elections and his address did not match his Ohio State issued driver’s license.

LaBrey, who works as a contractor maintaining the military’s armored fleet of Mine Resistant Armored Protected vehicles, traded his auto body shop and home four years ago for an air-conditioned tent in the desert that he shares with eight other men and a permanent address at his long-time friend’s house in Cincinnati to maintain his residency.Â

After consulting with a legal advisor with the Obama campaign over the phone, LaBrey was advised to return with a piece of mail listing the address on the books.Â  When he returned with six pieces of mail and his military identification he was granted a ballot by a poll worker.Â

“The second lady poll worker said all I had to provide was my military identification.Â  She didn’t even ask me for a piece of mail,” said LaBrey. “Then she told the other poll worker to make sure you ask if people are in the military or are stationed overseas–even though I told him that originally!”Â

Despite all his travels and tribulations once LaBrey made it to the polls there were no signs of long lines nor disgruntled turned away voters as he envisioned, just the customary political pan handlers circling the perimeter of the polling precinct.Â  Most voters were in and out of the polling stations within 15 minutes.

“It would appear as if God has