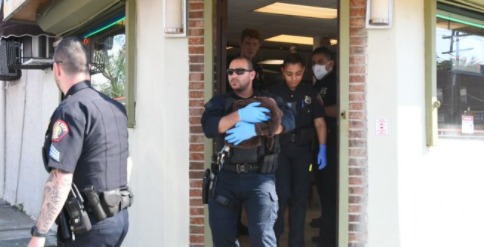 NBC News 4 New York reported that a scared 14-year-old mother of a newborn handed her baby to a customer in the El Patron restaurant located in Jersey City, NJ, before fleeing. Surveillance video captured the incident.

“She comes in. She looks me dead in the eye. I look at her, and she has these eyes of terror and like despair,” Franky Aguilar, owner of El Patron, said.

Aguilar said he knew something was wrong when the girl walked up to the counter. His father called 911, according to NBC News 4.

A good Samaritan stepped in to help the teenager and her baby. ABC7News said Alease Scott and her boyfriend were eating lunch at the restaurant when the distressed mother requested help.

“I said, ‘Do you mind if I check the baby’s vitals?’ She readily handed the baby over to me, so my focus went right onto the baby,” Scott said in the interview. She told NBC News 4 that the girl had dried blood on her leg, a sign that she was the mother.

NJ.com added that the baby girl still had her umbilical cord attached when the child’s mother handed her to Scott, who is trained in CPR and first aid.

“According to police radio transmissions, the girl fled the restaurant, but she was located a short time later at Old Bergen Road and Linden Avenue. She initially denied that she was the baby’s mother,” NJ.com reported.

Charges against the 14-year-old have been filed, according to Jersey City spokeswoman Kimberly Wallace-Scalcione. NJ.com reported that the mother and child were in good health.

WTHR pointed out that Scott is a former therapist and preschool teacher who knew what to do. She was concerned that the newborn did not appear to be moving much, so she took action.

“I administered oxygen to the baby,” Scott told WTHR. “Within a couple of seconds of her getting oxygen, we got the most beautiful cry that you’ve ever heard. Her little feet started moving.”