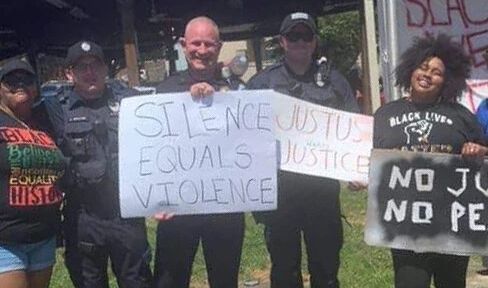 Two Virginia police officers who appeared to be supportive of the Black Lives Matter movement were recently exposed for participating in the pro-Trump insurrection at the U.S. Capitol on Jan. 6.

According to The New York Times, the officers, Rocky Mount Police Sergeant Thomas Robertson and Officer Jacob Fracker, were each charged a week after the deadly riot that left five people dead. The two officers are have been charged with disorderly conduct and disrupting the proceedings of Congress. However, before the riot, the cops participated — and even danced — at a Black Lives Matter rally in their rural town.

Bridgette Craighead, a 29-year-old hairdresser, organized the first Black Lives Matter protest in rural Virginia county. She stated that the police officers were friendly and that one of the officers brought pizzas and McDonald’s Happy Meals. The officers were seen in a video enjoying themselves at the rally.

According to The Daily Mail, Robertson and Fracker were terminated from their jobs with the Rocky Mount Police Department due to their involvement in the Jan. 6th riot.

So, in January, Craighead was shocked when someone sent her a photograph that showed Officer Jacob Fracker and Sergeant Robertson posing inside the U.S. Capitol on Jan. 6. She then confronted the police officers on Facebook to question them about their participation in the insurrection. She received a response that defended their actions.

Robertson had written that he was “proud” of the selfie he and Fracker took inside the US Capitol building.

“It shows two men willing to actually put skin in the game and stand up for their rights….Enjoy your feel good protests and fame. I’ll simply accept a ‘Thank you’ for the very blanket of freedom that you live and sleep under,” he wrote on Facebook.

Fracker and Robertson were the first law enforcement officials to be arrested for participating in the insurrection.