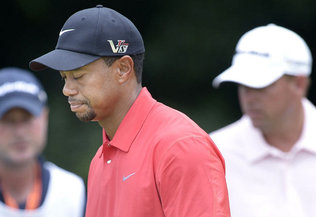 Tiger Woods struggled all week at the U.S. Open. Despite playing well on Friday (par 70), Woods missed too many putts on his way to a 13-over 293. Justin Rose, the 32-year-old Englishman, won the tournament.

ARDMORE, Pa — The USGA is understandably quite proud of itself after putting on a fantastic National Open championship at Merion Golf Club just outside of Philadelphia.

Here are some of the numbers which give insight into some of the financial logistics of the tournament.

$3 — Surcharge at Wells Fargo ATMs stationed at various points throughout the course.

$1.4 million — Purse that will go to the winner, Justin Rose. It was Rose’s first major of his career. He won it on Father’s Day in tribute to his late father, Ken.

“I miss him immensely,” Rose said of his father. “And I thought today was just a fitting time in which I could honor him by looking up. Even if Phil had finished birdie, birdie, I just felt like I had done what I could out there. I felt like I sort of put into practice a lot of the lessons that he’s taught me, and I felt like I conducted myself in a way that he would be proud.”

$115,591 — Amount of money that would have been won by Michael Kim, an amateur out of Cal. He tied for 17th place, but amateurs cannot collect winnings. He shot a 10-over 290 over the course of the four days. That’s better than Tiger Woods, Rory McIlroy, Adam Scott, Bubba Watson and defending U.S. Open champion Webb Simpson. Woods shot a 13-over 293.

Kim, it’s worth noting, had an African American on his bag: LaRue Temple, who is a regular at Merion and said to be one of the club’s best caddies. You have to wonder if Kim, who is expected to soon turn pro, may have found himself a good luck charm — or will at least get an interview when it’s time for Kim to get rolling.

“Kim needed a caddie, and they saw me in the parking lot,” Temple told reporters according to the Miami Herald. “They told me he’s a great golfer and plays for the Cal team and they won a lot. I just said ‘cool.'”