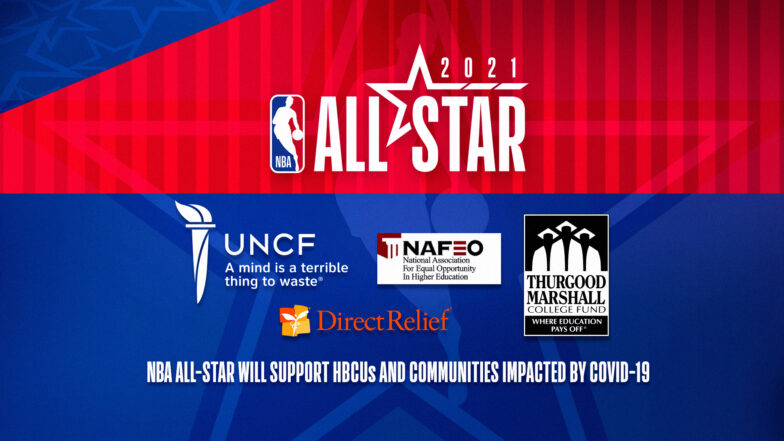 As the league prepares for next month’s annual midseason exhibition game, the National Basketball Association (NBA) has announced that the NBA All-Star 2021 will be held on Sunday, March 7 at State Farm Arena in Atlanta, home of the Atlanta Hawks.

The All-Star game will begin on-court action at 6:30 p.m. ET on TNT. With this announcement, the NBA and National Basketball Players Association (NBPA) are also revealing that they will commit more than $2.5 million in funds and resources toward Historically Black Colleges and Universities (HBCUs). They are also announcing that they are also supporting and bringing awareness around equity and access to COVID-19 care, relief, and vaccines.

In a written statement, NBA Commissioner Adam Silver stated, “NBA All-Star in Atlanta will continue our annual tradition of celebrating the game and the greatest players in the world before a global audience. In addition to the festivities on the court, the All-Star Game will honor the vital role HBCUs play in our communities and focus attention and resources on COVID-19 relief, particularly for the most vulnerable.”

“HBCUs provided premium education to our communities at a time when access to higher learning was denied us,” said NBPA Executive Director Michele Roberts. “They were there—and have remained there—for us. We now stand with them.”

“As a founding partner of the Thurgood Marshall College Fund, the NBA has been a consistent supporter for more than 33 years. By dedicating its All-Star platform to supporting Historically Black Colleges and Universities, the NBA is making a profound statement about the league’s commitment to a better future, recognizing the crucial role Black colleges have always played in facilitating racial equity and serving the African American community,” says Thurgood Marshall College Fund President and CEO Dr. Harry L. Williams.

Awareness will be raised around the disparate impact of COVID-19 on communities of color.

For the well-being and safety of the greater Atlanta community, there will be no fan activities, ticketed events, or hospitality functions as part of All-Star.

Additional details regarding NBA All-Star 2021 and the date of the NBA All-Star Draft will be announced in the coming days.