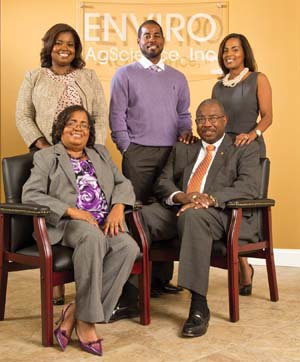 One of the nation’s largest black-owned companies, ENVIRO AgScience, Inc., is celebrating 30 years of business. The family-owned business has grown from a mom-and-pop landscaping business into a $29 million-dollar construction management and commercial landscaping firm.

In addition to its Columbia, South Carolina, headquarters, ENVIRO has offices in Atlanta, Las Vegas, and Los Angeles and is looking to expand its offerings globally. The company is ranked No. 92 on the 2015 BE 100s Industrial/Services List.

ENVIRO began as a commercial lawn care business that has grown into a full-service construction and landscape company servicing government, military, schools and universities, along with private sector firms. It was founded by Louis B. Lynn in 1985 after a successful career at one of the nation’s largest agrichemical companies. Â With a legacy of business excellence and ownership, including his grandfather, who owned a grocery store and his father, who ran a butcher shop, Lynn also chose the path of entrepreneurship. Lynn has parlayed a ‘golden handshake’ from Monsanto Corporation into a multi-generational, black-owned business.

Earlier this year, ENVIRO executed its succession plan and Lynn assumed the role of chairman, leaving his children to manage daily operations and strategy of the family’s construction management and commercial landscape firm. Now it is the next generation, Lynn’s children, who are spearheading plans to make ENVIRO a multinational company. His daughters Adrienne Lynn Sienkowski, 41 and an engineer, is chief operating officer, and Krystal Conner, 38 and a pharmacist, is CEO. His son, Bryan, 30, is a facilities manager.

“Our succession plan had a lot of the features of the model used by H.J. Russell of Atlanta-based H.J. Russell & Co. (No. 14 on the be industrial/service companies list with $237 million in revenues), but recognizes the unique challenges for women in the male-dominated construction industry,â€ says Lynn, referring specifically to the founder continuing to provide tutelage and making sure each daughter knows her assigned role. Adrienne was responsible for handling most of ENVIRO’s marketing and business development, and Krystal was charged with overseeing what Lynn refers to as money and people.

The ENVIRO philosophy is as much about building relationships as it is about buildings. Lynn credits small business programs for opening up several opportunities to work on local projects, which allowed the business to compete and grow. Local, state, and federal programs geared toward helping small and minority-owned businesses compete in the market have served as a hallmark of ENVIRO’s success. ENVIRO is a recent graduate of the SBA 8(a) business program and is currently a participant in the SBA HUBZone program. Also, ENVIRO was recognized as the Small Business of the Year by South Carolina’s Department of Commerce’s Minority Business Development Agency, the fourth fastest-growing company in South Carolina.