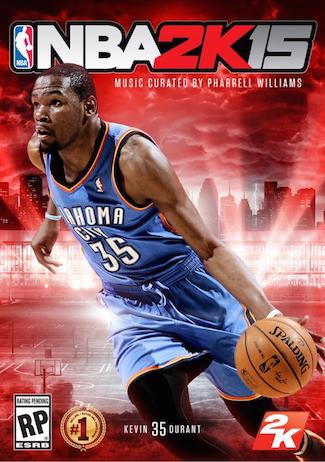 Today, hardcore gamers rejoiced as they were able to see Oklahoma Thunder All-Star Kevin Durant starring in 2K Sports’ upcoming title. Durant—No. 33 on Forbes 2014 list of the Most Powerful Celebrities with $32 million in earnings—is seen dribbling a ball set against the familiar red background that basketball simulation fans have come to know and appreciate.

It’s great enough of a cover to make people put all the free agency dramatics behind them (if only for just a moment). While there’s no doubt that 2K Sports will update the game with any and all off-season transfers that happen, this isn’t the only big news to develop for “NBA 2K15.” The other big news, of course, is the revelation that music maven Pharrell Williams, of N.E.R.D. and “Happy” fame, will curate the soundtrack for the new game.

Pharrell’s music knowledge is well-documented, so having him pick songs from several different genres should reflect well on the game. Plus, for those who enjoy playing video games with music, they’ll hear a lot of great new songs before suiting up to play the game’s features.

Will this be the best sounding NBA video game of all time? We shall see as “NBA 2K15” will slam dunk onto the PlayStation, PlayStation 4, Xbox 360, Xbox One, and Windows PC on October 7, 2014.