3 Common Mistakes Women Make To Get Ahead 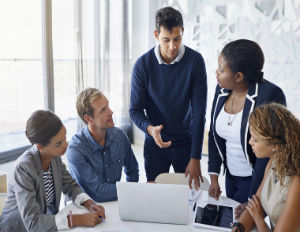 Women account for only 14% of executive positions at the nation’s largest corporations, according to Catalyst, a nonprofit organization dedicated to expanding opportunities for women in the workplace. While the gap has narrowed, women continue to earn less than men. The push to get more women in senior management positions and to bring gender diversity into the C-suite is ever steadfast. But beyond gender inequality, there are some pitfalls in the workplace that are hurting women’s careers.

Vanity + Trade‘s post on Women in the Workplace talks about the mistakes women oftentimes make and explores the male and female dynamics in the workforce. Debra Chen is the founder of Vanity +Trade, which is a destination platform for sharing ideas and curated content to educate, inspire, and celebrate executives and creative entrepreneurs. Here Chen spells out some common mistakes women have been known to make–and why they need to steer back on the right track to success:

One. Hiding your feminine side. The University of Michigan and Carthage College researchers wanted to find out if women who exhibited a masculine appearance and took on stereotypical masculine behaviors (aggression and self-reliance) would fare better in the workplace. Turns out, they receive more office bullying and sexual harassment, notes Chen. The findings were such that, “For women, working in male-dominated work groups, having a stereotypical masculine appearance, and being aggressive were associated with exposure to sexist remarks and gender policing,â€ adds Chen.

Two. Always going against the grain. Women have been told they are “too much of a team playerâ€ or “too passiveâ€ so the adaptive tone turns you into a contrarian. This approach over time lacks credibility and comes across as narrow-minded, Chen explains. Having the ability to embrace and selectively choose new ideas or endorse other people’s ideas are essential qualities of true leadership, she stresses.

Three. Detaching from other females. From the time they are little girls, women are taught to compete. Women always need to be better than because they’re taught to come from a place of lack as women. Chen states that men however, operate from a sense of, “there’s this whole pie, and I want my piece, and I don’t care if he gets his piece, and maybe we even have to work together to start that business, start that company.â€ The key is to understand that through collaboration, you can still achieve your goals and that women’s career is not a zero-sum game.